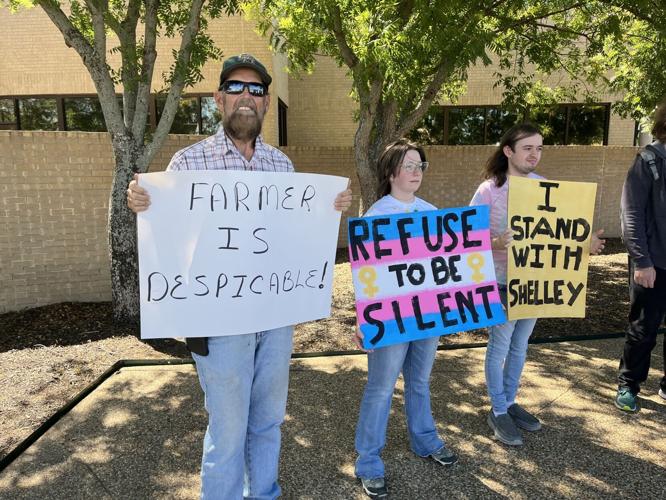 Community members and students held up posters in support of a former Weatherford College employee who filed a lawsuit against the college claiming sexual harassment and retaliation against President Tod Allen Farmer. 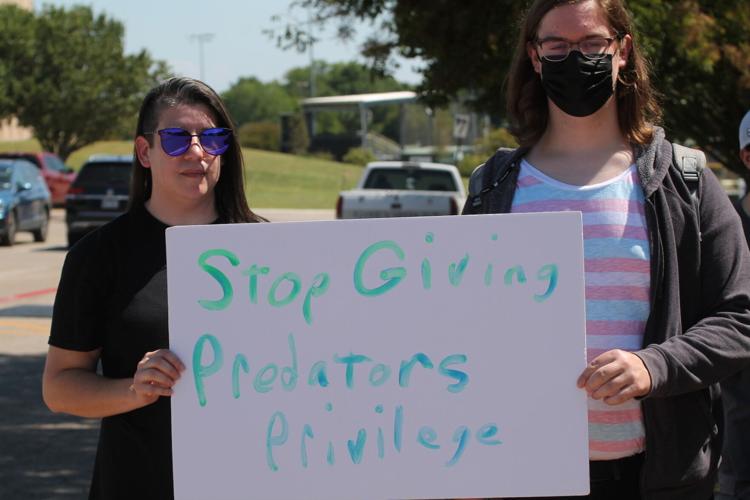 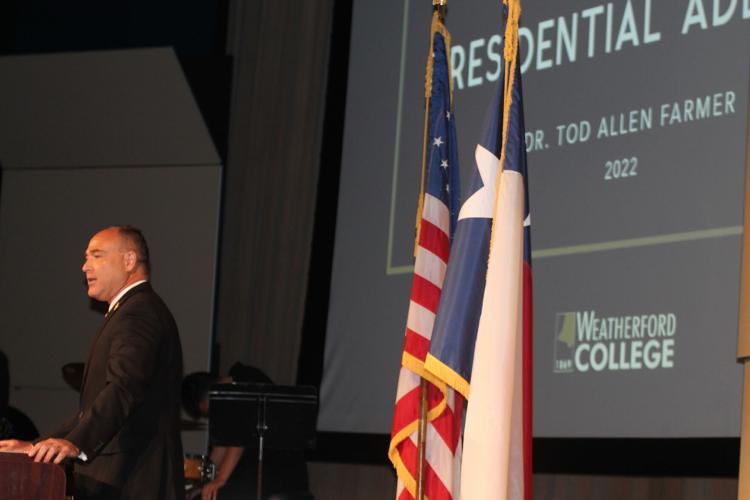 Community members and students held up posters in support of a former Weatherford College employee who filed a lawsuit against the college claiming sexual harassment and retaliation against President Tod Allen Farmer.

WEATHERFORD, Texas – A line of residents, students and former staff held up signs this week on a north-central college campus to protest the school's president, who is accused of sexual harassment and discrimination in a lawsuit.

As ceremonial festivities were readied for a presidential luncheon on the Weatherford College campus Thursday, Sept. 22, the protesters called out President Tod Allen Farmer, with one sign reading, "Farmer is despicable," and another, "Stop giving predators privilege."

The incident came weeks after a former WC employee filed a lawsuit against the college. Shelley Gipson claims she was the victim of sexual harassment and discrimination by Farmer.

Those present for Thursday's protest said it's not an isolated incident.

Shantee Siebuhr, a former instructor at Weatherford College, said she left in August 2021 after being transferred from one position to another because of her appearance, specifically her weight and tattoos.

"Because of the good work that I did, it put me in the public," said Siebuhr, who was featured in the Weatherford Democrat for her success as an adviser for the school's Phi Theta Kappa honor society chapter. "At that point, I needed to be moved out of my position and slowly but surely, any opportunity that came about, I got moved."

Siebuhr said she was also given additional duties with no change in pay, to the point she had to look elsewhere for work to provide for her family.

"I asked my colleagues if I should stick it out because I wanted to — I do love this institution, I was a student here — and I loved my students because they are the heart of Weatherford College," she said. "What I was told was as long as Dr. Farmer was in charge, I was going to continue to get the duties I was getting without the pay and the recognition until I left. And so I did."

Gipson was employed at the college from Sept. 14, 2020, to July 26, 2021, and claims Farmer, who was married at the time, indicated he wanted to know if they were ever going to be "more than professional" during a December 2020 meeting. After rejecting his advances, Gipson claims she was transferred to several different departments.

The lawsuit states Gipson reported the workplace harassment and discrimination with the Title IX compliance officer and Human Resources around February 2021. After a conversation with Farmer in July 2021 regarding being moved to another department, Gipson was told Farmer "should have done a better job of being a boss and 'educating [Gipson] on the politics of the college,'" according to the lawsuit.

Siebuhr said she witnessed the treatment of Gipson while working with her at the college.

Scott Butler, a Weatherford College alum, said he emailed the board in April to let them know about the allegations.

"It's time the women who have been affected got their justice," he told the Weatherford Democrat. "We're here for the actions of the president, and the inactions of the board of trustees — to bring attention to the culture of the workplace."

The Weatherford Democrat filed an open records request with college officials, seeking any and all complaints naming Farmer that sought a Title IX investigation. Curlee said there were no records, with the exception of Gipson's complaint. A second public information request was submitted for any records or communications generated by Gipson's complaint, as well as any investigative materials and/or reports in response.

"On advice of Weatherford College's outside insurance counsel and [pursuant] to Texas PIA 552.103, Weatherford College respectfully declines to provide records, at this time if any exist, that may be related to the complaint filed by Shelley Gipson," WC Attorney Dan Curlee wrote.

The Weatherford Democrat also requested any settlement agreements WC entered into in response to claims against college administrators from March 2018 to present.

The college provided documentation of a settlement following a charge of discrimination filed by Lisa Welch with the Texas Workforce Commission's Civil Rights Division.

Welch, who taught at the college for nine years and served as the Life Sciences department chair for five years, filed the claim in August 2019 after she received a notice of the decision to not renew her position at WC.

"Weatherford College is made up of so many employees that just want to help students become who they are meant to be," Siebuhr said. "And they are dictated by a man who only cares about appearances and how others view him and his college. He has made that clear by both his words and his actions."