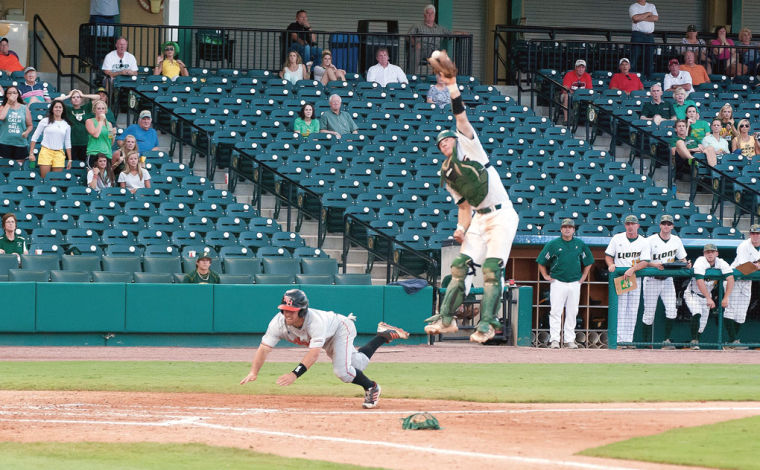 Sam Houston State designated hitter Shea Pierce slides past Southeastern Louisiana catcher Sam Roberson to score the Bearkats’ third run Thursday at the Southland Conference Baseball Tournament. After the Lions busted out with five runs in the third inning, the Bearkats rallied for three runs in the fourth, but that was all the Southland Conference champs could manage in a 5-3 loss at Constellation Field in Sugar Land. The Bearkats battle Lamar at noon today in an elimination game. Lamar blasted McNeese State 10-3 Thursday in a losers’ bracket game. 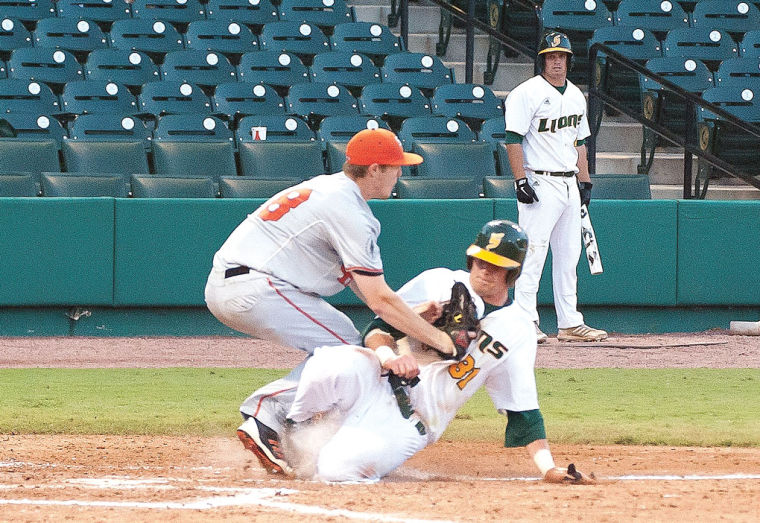 Sam Houston State designated hitter Shea Pierce slides past Southeastern Louisiana catcher Sam Roberson to score the Bearkats’ third run Thursday at the Southland Conference Baseball Tournament. After the Lions busted out with five runs in the third inning, the Bearkats rallied for three runs in the fourth, but that was all the Southland Conference champs could manage in a 5-3 loss at Constellation Field in Sugar Land. The Bearkats battle Lamar at noon today in an elimination game. Lamar blasted McNeese State 10-3 Thursday in a losers’ bracket game.

One big inning did in the Bearkats on Thursday night.

After giving up five runs in the third inning to Southeastern Louisiana, Sam Houston State responded and chipped away at the deficit. The Kats had their chances to pull even with the Lions but couldn’t make the key hit when they needed it Thursday night at Constellation Field.

The Bearkats lost 5-3 and now will have to win twice today to stay alive in the Southland Conference Tournament, beginning with an elimination contest against Lamar at noon.

“We had one bad inning and they executed. That was the difference in the game,” Sam Houston State coach David Pierce said.

Should the Kats beat the Cardinals, they would have to turn around and face Southeastern Louisiana in a second elimination game later in the evening.

“Things have been going are way lately, winning 14 out of 15 or whatever it was. In the game of baseball, things don’t always go your way,” Kats sophomore center fielder Colt Atwood said. “We gave ourselves the opportunity, that’s all you can ask for. Timely hits are huge and you don’t always get the timely hit. You just have to keep fighting and never get down on yourself.

“We’ll come back tomorrow and win two. That’s all you can think about right now is win the first one and move on and just win.”

Through the first two and half innings Thursday, Sam Houston State starting pitcher Cody Dickson and Southeastern Louisiana starter Tate Scioneaux had their way with batters. Both pitchers faced the minimum number of batters in the first two innings, while Scioneaux escaped the third with a shutout intact despite giving up a two-out single with the top of the order due up.

In the third, the Lions broke through and did more than enough damage.

Left fielder Ladd Rhodes started the big inning with a single through the left side of the infield. Following a sacrifice bunt by designated hitter Gabe Woods, Southeastern loaded the bases with just one out.

The Lions then connected for their three big hits when first baseman Jameson Fisher roped a two-run single through the right side of the infield. Catcher Sam Roberson tripled down the right-field line to the corner to drive in a couple of more runs. Center fielder Harry Slade added to it with an RBI groundout to third base to cap the five-run inning.

“The pitchers always have our backs, so we’ve got to have their backs,” Atwood said. “We understand it was a rough inning to give up five runs. It’s our job to come back and scratch back.”

The Bearkats clawed into the deficit in the top of the fourth. Atwood singled to left-center and catcher Anthony Azar doubled to the left-field wall to advance Atwood to third.

Designated hitter Shea Pierce smoked a liner into right field to get Sam Houston State (37-19 overall) on the board. Shortstop Carter Burgess then cleared the bases with a two-RBI double to the gap in right-center.

Since the throw home went beyond the plate, Burgess was thinking about going home and got caught in a rundown before being tagged out for the inning’s final out.

“We scratched three the next inning and that was huge,” Atwood said. “We had momentum on our side and we were feeling it.”

In the fifth, the Bearkats had a golden opportunity when right fielder Ryan O’Hearn and second baseman Ryan Farney singled to lead off the inning. Both moved into scoring position following a sacrifice bunt by first baseman Jessie Plumlee. Atwood’s liner up the middle was snagged by Scioneaux for the easy out at first. Azar was walked to load the bases for third baseman Kevin Miller, who flew out to center field to end the inning.

Dickson recovered from the five-run third and held Southeastern Louisiana (35-22) to just four scattered hits over the next 3 2/3 innings before Michael Burchett relieved him and threw the final 1 1/3 innings without allowing a baserunner.

“I thought Cody’s competitive spirit was great,” Pierce said. “He competed as well as he can compete. I wouldn’t say his stuff was his best, but he competed and gave us a chance to win.”

Sam Houston State had another opportunity to rally and tie the game up in the ninth.

Burgess reached first base safely on an infield single and O’Hearn followed with a walk. The Bearkats couldn’t get the timely hit as pinch hitter Hayden Simerly grounded out to second base to advance both runners into scoring position and Plumlee struck out looking to end the game.

At noon today, Sam Houston State is set to face Lamar, which won two of three from the Bearkats in Beaumont on April 12-14.

“We’re looking for a little bit of revenge as well. We don’t like dropping two of three to anybody. We’re going to come out and play hard. You can guarantee that.”

Irene Jaehne Mouser beloved mother, grandmother, and friend went home to be with her Lord and Savior at the age of 93, in Huntsville, Tx. on June 9, 2021. Irene met her husband Leroy Mouser while working at the Houston Police Department. In 1947, Leroy and Irene were married, had three sons,…