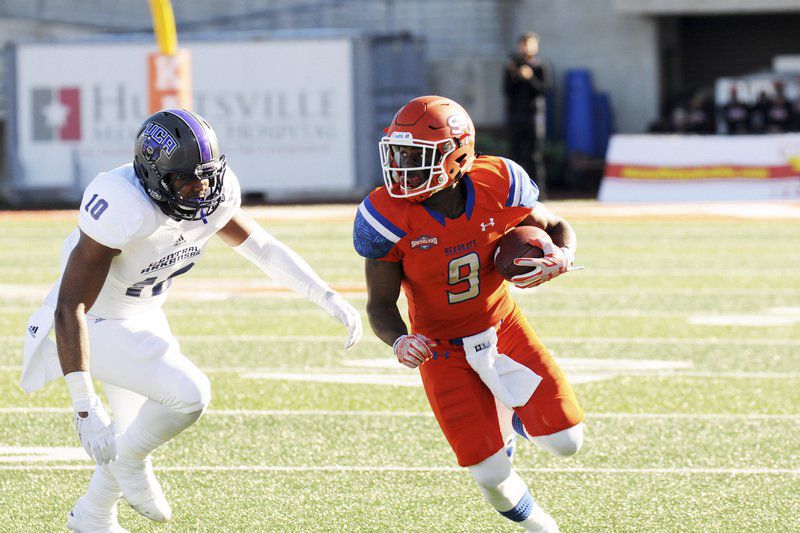 Sam Houston receiver Yedidiah Louis looks for an edge against Central Arkansas linebacker James Graves during the second quarter at Bowers Stadium. Louis led the team in receiving yardage as he caught nine passes for 168 yards and four touchdowns on the night. 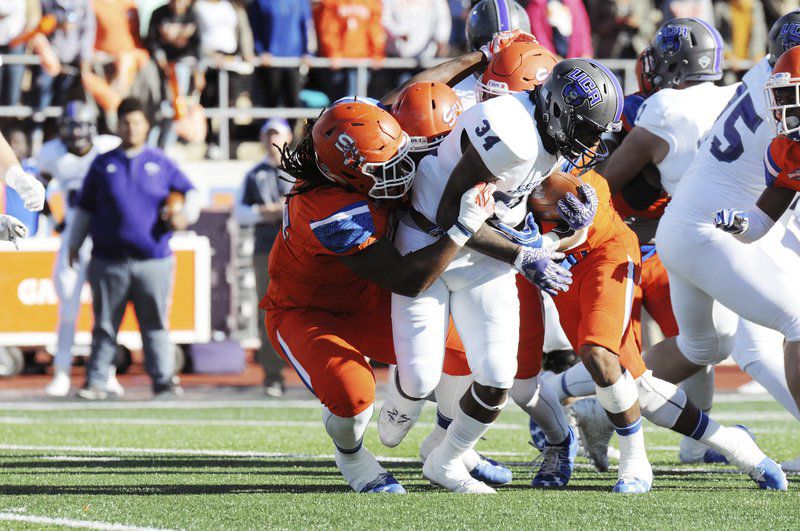 A trio of Bearkats pile on Central Arkansas running back Antwon Wells (34) during the first quarter on Saturday at Bowers Stadium. 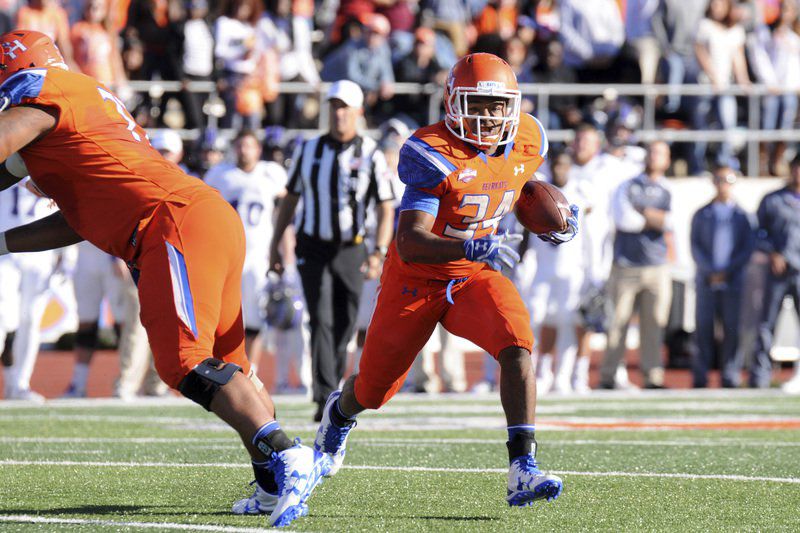 Sam Houston State running back Remus Bulmer looks for a gap in the defense during the second quarter against Central Arkansas on Saturday at Bowers Stadium.

Sam Houston receiver Yedidiah Louis looks for an edge against Central Arkansas linebacker James Graves during the second quarter at Bowers Stadium. Louis led the team in receiving yardage as he caught nine passes for 168 yards and four touchdowns on the night.

A trio of Bearkats pile on Central Arkansas running back Antwon Wells (34) during the first quarter on Saturday at Bowers Stadium.

Sam Houston State running back Remus Bulmer looks for a gap in the defense during the second quarter against Central Arkansas on Saturday at Bowers Stadium.

For the sixth straight year, the Bearkats are in the Football Championship Subdivision playoffs. That much, along with likely a first-round bye, the Kats knew Saturday night.

What they didn’t know was how high of a national seed they were going to get.

On Sunday morning, the top-ranked Sam Houston State football team, which is the only undefeated team in the FCS and one of three unbeaten teams in NCAA Division I, was selected as a national seed for the first time since the 2011 season and came in at No. 5.

The Kats will be hosting the winner of Chattanooga and Weber State on Dec. 3 in the second round of the FCS playoffs. The game will be streamed online on ESPN3.com and is set for kickoff at 2 p.m.

“We basically have the same mindset, just making sure we go 1 and 0. We just have to focus on us and doing what we need to do to be successful out on the football field,” Bearkats defensive end P.J. Hall said.

“We have a lot of experience on this team. Almost everybody is back from these past couple of years. We’ve been to the playoffs. We’ve been on away games. We know what to expect. This is nothing new for us. We’re just ready to go out and play. We haven’t been able to play that many home games in the playoffs, so to be able to have a home game instead of being on the road is going to help us.”

While the Kats are happy to be a national seed, a bone of contention was that they are only guaranteed one home game as the No. 5 seed, while Jacksonville State and James Madison could host at least two as Nos. 3 and 4 seeds, respectively. Top overall seed North Dakota State and No. 2 Eastern Washington have home-field advantage through the semifinals.

If the Bearkats win their second-round playoff game, barring an upset by either New Hampshire or Lehigh over James Madison, Sam Houston would be hitting the road to Harrisburg, Virginia, to take on the Dukes, who went unbeaten in the Colonial Athletic Association and whose only loss came against North Carolina in September.

“It is what it is. Whatever the committee is going to seed, they’re going to seed,” said Sam Houston head coach K.C. Keeler on the NCAA FCS Football Championship Selection Special. “All I know is that we’re undefeated. We were No. 3 in the country last year, No. 4 the year before. I have a better team this year, so I think we’re excited to play anyone in the country. If we have to go on the road, we have to go on the road. ... We’ve had a phenomenal year, a historic year. We’re ready for that second season.”

A sticking point is that the Bearkats, whose No. 1 ranking in the STATS FCS poll was undervalued by the selection committee and was No. 5 in the playoff committee’s rankings, manhandled a Central Arkansas team that the committee valued higher (No. 7) than its No. 11 ranking in last week’s STATS poll.

Additionally, in the Simple Ratings System, what is essentially computer rankings that the selection committee uses as a tool in the decision-making process, the Bearkats are No. 4 behind North Dakota State, Eastern Washington and Jacksonville State — James Madison is No. 7.

“We just took apart the No. 6 or 7 team in the country. We took them apart,” Keeler said. “We were up by 43 (points) with 30 seconds left to go in the game and they call a timeout to see if they could get a score.

“I don’t think it will affect (the Bearkats) one iota. Some of the greatest victories I’ve ever had have been on the road in the playoffs. ... So if we have to go on the road, we’ll go on the road. All I know right now is it’s either Weber State or Chattanooga. Our kids will not have a bracket or where the other games might be. It doesn’t really matter. If we don’t win this one two weeks from now, the season’s over. That’s how we look at it.”

Despite not getting as good of a national seed as they were hoping for, the Bearkats didn’t seem overly concerned with the seeding, but more so with getting ready for the playoffs.

“I don’t know much about either team, but clearly they’re in the playoffs, so they’re both really good teams,” Sam Houston quarterback Jeremiah Briscoe said of Weber State and Chattanooga. “We can’t take any team lightly in the playoffs. I don’t know what the rest of the bracket is because that doesn’t matter to us. We stopped watching after we saw where we were.

“To us, nothing else really matters. It’s all about us and who we’re going to play. Once we play our game, we’ll worry about who we’re playing next after that.”

A major benefit for the Bearkats receiving one of the eight national seeds is that they get a first-round bye.

After playing games the last 10 weeks, the Bearkats could use the extra time to recuperate.

Weber State and Chattanooga will play on Saturday in Chattanooga, Tennessee, at 2 p.m. The first-round matchup can be streamed online on ESPN3.com.