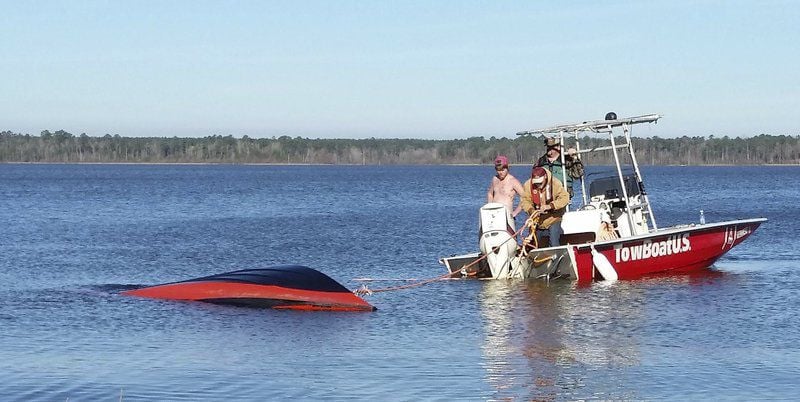 Darrell Proffitt/For The Huntsville ItemTowBoatU.S. managed to right Brandon Lovelace's 21-foot Champion bass boat and tow it to the Mill Creek Park boat ramp. The boat began taking on water for unknown reasons and sank as Lovelace, of Port Neches, and Darrell Proffitt of Center, competed in the Rat-L-Trap tournament on Sam Rayburn on Jan. 22. Both men were wearing lifejackets and survived after spending 90 minutes drifting in waves as tall as 6 feet. 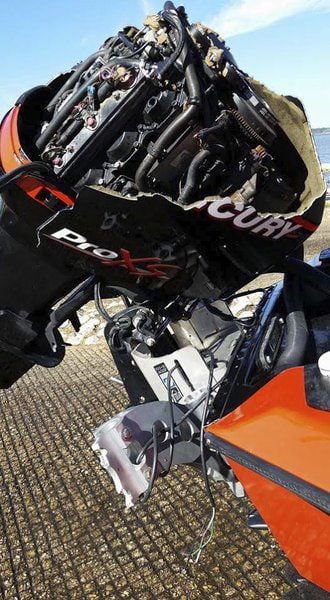 Darrell Proffitt/For The Huntsville ItemThe outboard engine and other valuable equipment on the boat were destroyed in the mishap.

Darrell Proffitt/For The Huntsville ItemTowBoatU.S. managed to right Brandon Lovelace's 21-foot Champion bass boat and tow it to the Mill Creek Park boat ramp. The boat began taking on water for unknown reasons and sank as Lovelace, of Port Neches, and Darrell Proffitt of Center, competed in the Rat-L-Trap tournament on Sam Rayburn on Jan. 22. Both men were wearing lifejackets and survived after spending 90 minutes drifting in waves as tall as 6 feet.

Darrell Proffitt/For The Huntsville ItemThe outboard engine and other valuable equipment on the boat were destroyed in the mishap.

arrell Proffitt of Center and Brandon Lovelace of Port Neches didn’t weigh in a single fish during the 2017 Rat-L-Trap tournament held Jan. 22 on Sam Rayburn Reservoir. But they still walked away with a grand prize, one that was worth much more than any sack of bass might have earned them.

Proffitt and Lovelace narrowly escaped death on that fateful Sunday afternoon when Lovelace’s bass boat began taking on water for unknown reasons and sank as they made their way toward the boat ramp at Mill Creek Park, where they had launched roughly seven hours earlier.

The mishap left the two men with no choice but to jump into the 61-degree water where they spent the next 90 minutes bobbing and paddling and getting beaten to a pulp by a relentless chain of tall waves churned up by high winds that ushered in a recent cold front.

The wicked front packed wind gusts up to 40 mph as it raced across eastern Texas, pummeling lakes all across the region and turning them into watery danger zones riddled with whitecaps and treacherous rollers estimated by some counts to be as tall as 8 feet.

The waves were especially bad at ’Rayburn, a 114,000-acre reservoir east of Lufkin known for its big bass and huge water. Proffitt and Lovelace — who have roughly 30 years of experience on the lake between them — knew the weather system was coming and they planned their tournament strategy around it.

For starters, they chose a wind-protected boat ramp in Mill Creek Park to launch Lovelace’s 21-foot Champion before motoring roughly two miles to the Easley Flats area to soak their baits around the U.S. Highway 96 roadbed. The idea, said Proffitt, was to put themselves in a decent fishing area that offered some shelter from big winds that wouldn’t require navigating across a lot of big water on the way back.

“We were prepared for it,” he said. “We didn’t just fly by the seat of our pants. We both have a ton of experience running boats and we had everything planned out. We didn’t choose to fish where we did because we were on fish. We did it for safety purposes. We knew the weather was coming and we knew it was going to get rough later in the day, so we stayed pretty close to launch, two miles at the most.”

What the anglers didn’t prepare for was a nightmare that began unfolding as they started making their way back to the Mill Creek boat ramp, somewhere around 2 p.m. According to Proffitt, they were riding the tall swells with no issues when Lovelace looked back and saw water boiling through the compartment door at the rear of the boat.

“We didn’t take any waves over the front or hit anything,” Profffitt said. “The boat just started taking on water for some reason. We had run the bilge pumps a couple of times during the day, but they never stayed on for more than a few seconds. We were probably 200-300 yards from Mill Creek cove and maybe 75 yards from the bank when we saw the water pouring in. I told Brandon to turn on the bilge pumps and he said they were already on. Water was coming in faster than the bilges could pump it out.”

Realizing they were in serious trouble, Proffitt said Lovelace goosed the throttle in an effort to reach the nearby shoreline. That’s when the outboard died and never regained power.

“By this time the whole back of the boat is full of water and that’s when reality set in,” Proffitt recalled. “I told Brandon we needed to get to the front of the boat. About two minutes later the whole back end went under, causing the boat to roll. We didn’t have any choice at that point except to jump and hope for the best.”

Both men were wearing lifejackets when they leaped overboard into a froth of towering waves churned up by the stout northwesterly winds. Proffitt donned a traditional buckle-up model; Lovelace, an inflatable PFD designed to inflate once submersed in water.

While the lifejackets ultimately did their job and kept the anglers afloat, Proffitt said there were several times over the next 90 minutes when he questioned whether he and his partner would survive or not.

“Six-foot swells were coming right down the pike,” he said. “As soon as we hit water our heads went under and the water was cold enough that it took our breath away. Brandon was pretty rattled and I had to yell at him to get his head on straight. I thought he was going to drown right off the bat. We kept yelling to one another, but after about 5 to 10 minutes, we lost sight of one another in the swells.”

Proffitt said his first inclination was to attempt to swim to the nearest shoreline, but it was impossible.

“I made it a few feet and realized pretty quick there was no way to get there,” he said. “The waves wouldn’t let us go that direction — they were just too strong. We just had to go with them. I’m not sure how far the waves took us, but I know it was about 1 1/2 hours of floating and paddling in some of the biggest waves I’ve ever seen.”

The angler added that the waves were so powerful that it became a constant struggle for both men to keep their heads above water and to prevent their lifejackets from being ripped off their bodies.

“I was having to hook both thumbs in the bottom of the lifejacket and pull it down on my shoulders to keep it from pulling over my head and Brandon did the same thing,” he said. “We took waves over our heads every 10 seconds. We couldn’t paddle with our arms, just our legs. When a wave would come, I would put my legs up and let it take me. Then I’d kick some more once it passed. I really don’t think my kicking was getting me anywhere, but in my mind it made me feel like I was doing something.”

Exhausted, water-logged and cold, the two anglers washed ashore several minutes apart on a main lake point. Lovelace was the first to reach the bank, but Proffitt didn’t realize it until he saw him waving his yellow lifejacket in the air.

“At first I thought the lifejacket was in the water and I immediately assumed the worst,” Proffitt said. “Then I saw him waving it. That’s when I knew my prayers were answered. I didn’t care about the boat or anything else as long he and I made it. We hadn’t seen one another in over an hour and neither of us knew whether or not the other one had made it. In looking back, there is absolutely no way either one of us would have survived this deal without our lifejackets. I don’t know that everybody would have made it. I can say from experience that you have to be pretty darned determined to do it.”

Proffitt said Lovelace was unable to walk very well due to a foot injury he sustained a year ago, so he set out alone to look for help at around 4:30 p.m. Not long into the journey he came across an old roadbed that dumped into the lake in the back of a cove. He said the road eventually lead him to a house. Luckily, somebody was home at the time.

“The people called for help and gave me a dry top and blanket to take back to Brandon,” Proffitt said. “It took me about 30 minutes to get back, maybe a little less. I got Brandon up and he tried to walk, but he only made about 10 feet and fell. I headed back out at that point and I ran into a volunteer fireman. Together, we managed to get Brandon out of there.”

TowBoatU.S. crews were able to right the Champion 210 and tow it back to Mill Creek Marina in calm water the following day, but the boat and its contents are wrecked. The motor’s cowling was torn in half, one of the Minn Kota Talons was ripped off the transom and three Humminbird Helix 12.1 chartplotters were destroyed. Additionally, the anglers lost all of their tackle, including nearly two dozen expensive rod/reel combos and dozens of Rat-L-Traps.

Amazingly, Lovelace did manage to salvage one of his rod/reel combos and the Rat-L-Trap that was tied to the line, but it wasn’t on purpose. Somehow the rod got snagged on his lifejacket when he went into the water and it rode across his back all the way in.

“That gave him something else to worry about the whole time,” Proffitt said. “He was afraid to try to get it off because he thought the hooks on the lure might punch a hole in his lifejacket. That would have been a really bad deal.”

No doubt, the outcome could have been a whole lot worse, especially had water temperatures been a few degrees colder or had the anglers not had their lifejackets secured when they went overboard. Nobody knows that better than Darrell Proffitt and Brandon Lovelace.

“We both feel very lucky to be alive,” Proffitt said. “We both feel like we won that tournament and we never even made it to weigh-in.”

Matt Williams is a freelance writer based in Nacogdoches. He can be reached by e-mail, mattwillwrite4u@yahoo.com.