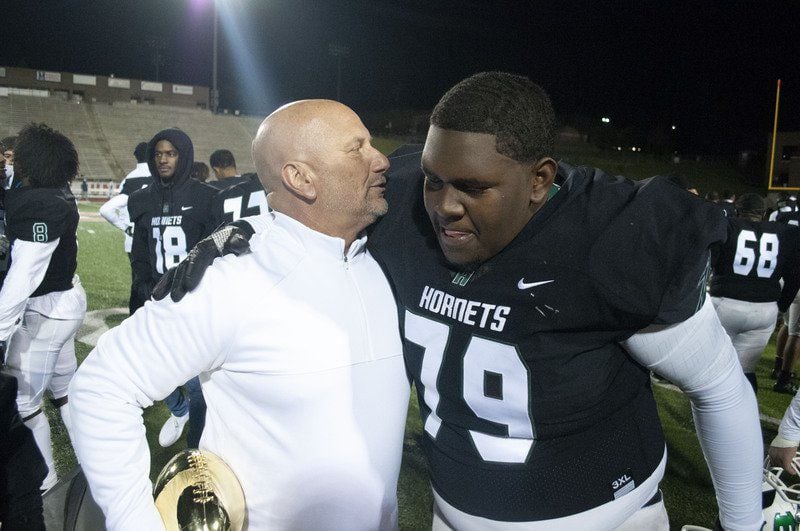 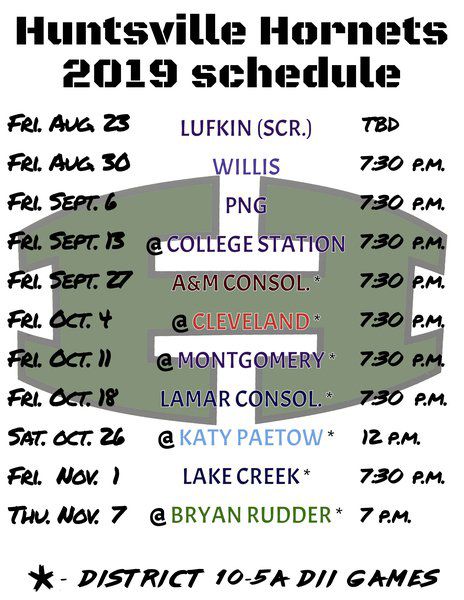 It’s been a few months since the Hornets’ best season in nearly 30 years came to an end. Now, it’s almost time to see what they can do in 2019.

A little less than a month away from kicking off spring training, Huntsville released its schedule for the upcoming campaign.

“Obviously it’s exciting,” Hornets head coach Rodney Southern said. “This group of guys now who are going to be seniors, they’ve been a part of a lot of wins here, whether it’s as freshmen or on JV. They’ve won a lot of ballgames. We’re losing a talented senior class — talented in a lot of ways. I think this group of guys coming back, they’ve got a lot of playing time in the playoffs whether they were starters or No. 2 guys.”

Last fall, the Hornets lost just once in the regular season to Class 6A College Station. Huntsville then ran the table in district play for an outright district championship.

The 2019 schedule is mirrored from last fall’s, so road games in 2018 will be home contests this fall and vice-versa.

The first half of the schedule will be more Hornet-friendly.

Instead of traveling to Lufkin for a scrimmage and hitting the road to take on Willis in the season opener, Port Neches-Groves and opening district play at A&M Consolidated, those regular-season games will be held at Bowers Stadium.

This fall, Huntsville has just one road game at College Station (Sept. 13) through the month of September.

The Hornets host Willis on Aug. 30 and Port Neches-Groves on Sept. 6. Following the road game at College Station, Huntsville hosts A&M Consolidated in the district opener on Sept. 27.

“The good thing is that we won’t have to travel until, technically, the third week of the season, plus a scrimmage. That’ll be a huge plus,” Southern said. “Three of our first four will be at home. That’s good and bad, because in your district stretch, you’re going to be on the road more.

“I don’t worry as much now. Our program is much better established than we have been. I don’t worry about going on the road as much. We went on the road a lot last year and we were on the road during the playoffs. Hopefully our kids are well enough prepared to handle that.”

Following the district opener, the Hornets play at Cleveland on Oct. 4, travel to play Montgomery on Oct. 11, host Lamar Consolidated on Oct. 18, play in Katy against Paetow on Sat., Oct. 26, host Montgomery Lake Creek on Nov. 1, then cap the regular season in Bryan on Thurs., Nov. 7 against Rudder.