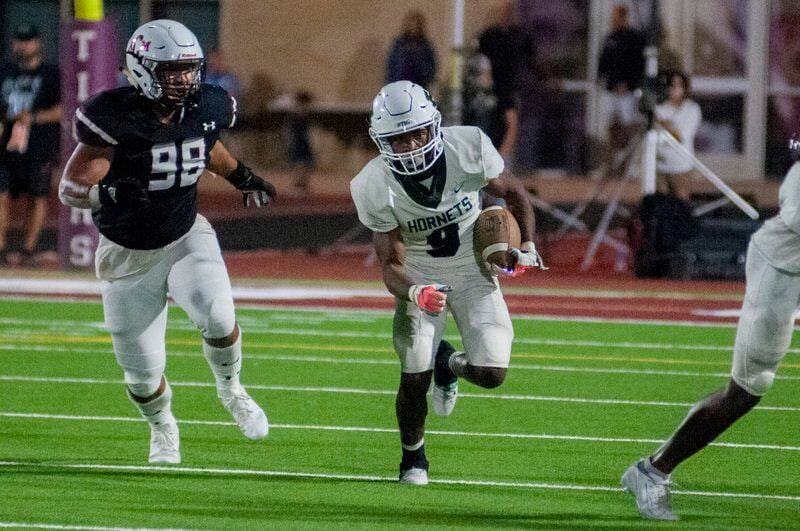 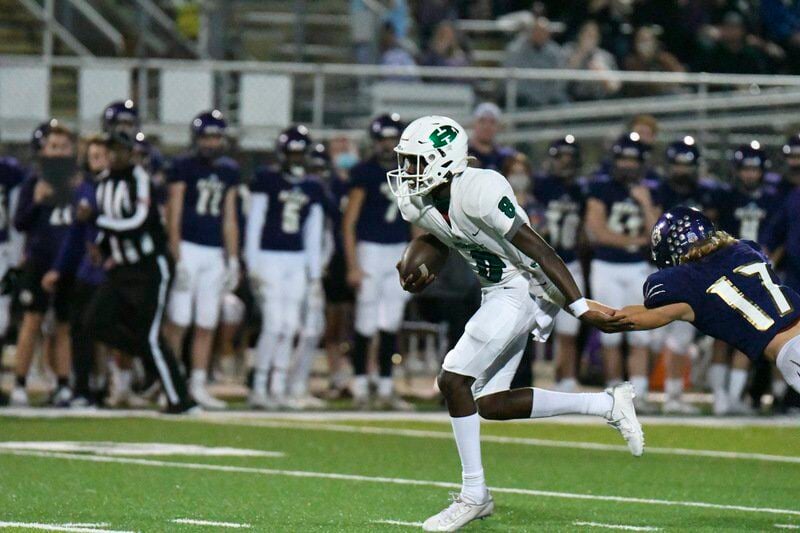 Joseph Brown | The ItemHuntsville junior quarterback AJ Wilson breaks away from a Montgomery defender during the first half of Friday’s district game.

Joseph Brown | The ItemHuntsville junior quarterback AJ Wilson breaks away from a Montgomery defender during the first half of Friday’s district game.

At least 15 Hornets have moved on to play Division 1 football — something that isn’t often seen at a Class 5A school outside of a metropolitan.

In 2021, the Hornets will keep that streak alive with senior quarterback AJ Wilson committing to Houston Baptist University.

“The big thing is you hope that it shows you’re consistently developing players,” Hornet head football coach Rodney Southern said. “We had a run on defensive lineman and Huntsville has had a history of skill guys, but it’s good to have people recognize that your kids can play, and are also academically ready to go.”

Wilson committed to the Huskies earlier this week, potentially wrapping up his recruiting process.

But with this hurdle out of the way, Wilson will look to finish his senior year strong with just three guaranteed games left.

“It’s a relief,” Wilson said. “I haven’t been very worried, but I’ve been worried about where I wanted to go and where would be a good fit for me, including if I was going to get to play.”

Wilson has been the first athlete in the class of 2022 to announce his commitment, but several other players are gaining looks and talking to coaches about their future, including senior running back Jaylon McClain.

McClain has received offers from East Texas Baptist University and Bethel College, but the senior has not decided on a place. However, he continues to show out and work out for coaches who request it.

“It’s a blessing,” McClain noted. “Since I was a freshman I’ve wanted to play football. I’m glad that I have the coaches I have to get me help to where I’m at right now, where other coaches can look at me and I can play at the next level. I’m just gonna ask my coaches about it, pray about it and think about it and hopefully, I can make my commitment soon.”

There are other Hornets that are gaining the attention of coaches at the next level, including senior defensive end Calvin Simmons, senior kicker Christian Avelar and senior receiver Justin Butcher. All of these players have gained the eyes of recruiters, but have yet to commit to any school.

“I tell the kids the hard thing is being patient,’ Southern added. “Everybody thinks they can play Division I football until they realize it’s not necessarily where you play. But if you have a passion for football and want to play, there is a place to play.”

Huntsville has had at least one player reach the Division 1 level every year since 2014.

In years to come, the Hornets will look to continue their ways and the coaches will help their athletes move on to the next level.