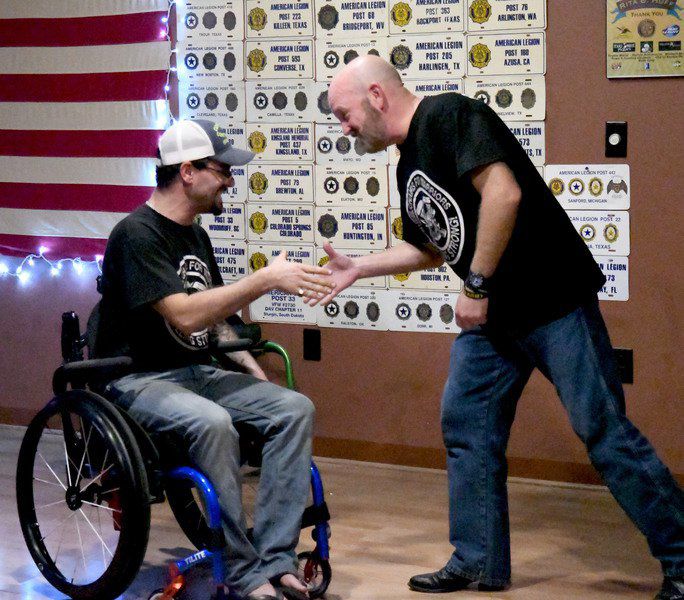 Joseph Brown/ The ItemMarine Lance Corporal Jacob McWhorter, a combat veteran, tries out his new wheelchair that he was given on behalf of Wheelchairs for Warriors. He is pictured with rehab seating specialist Paul Morgan. 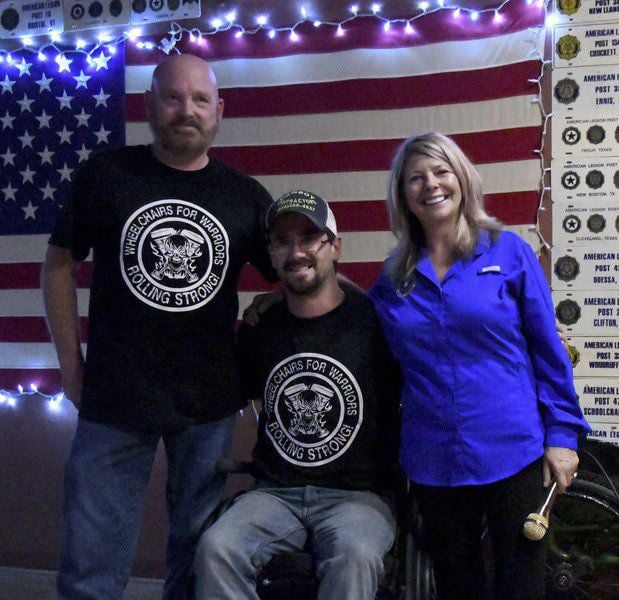 Everyday life is now going to get easier for Huntsville resident and combat veteran Jacob McWhorter, who at one time felt left behind. But that is no longer the case, thanks to a brand new lightweight wheelchair courtesy of Wheelchairs for Warriors.

McWhorter is ranked as a lance corporal in the U.S. Marine Corps. McWhorter received his new chair on Tuesday at the American Legion Post 95 in Huntsville.

The Marine suffers from a disability today after a chemical agent that he was exposed to in combat gave him Mitochondrial myopathy — a disease that causes muscle weakness, heart failure, dementia, movement disorders and stroke-like episodes. There is no specific treatment for mitochondrial myopathy. However, physical therapy can extend the range of movement of muscles and improve dexterity.

The VA has a history of inconsistent care for wounded veterans. According to the Wheelchair for Warrior foundation, disabled veterans are often assigned substandard mobility equipment that hinders rather than helps their ability to function and live life easily.

Which is where Wheelchairs for Warriors comes in.

The non-profit provides custom fit wheelchairs to match the physical and lifestyle needs of veterans and first responders. McWhorter’s new wheelchair is made of titanium and weighs less than 15 lbs. (the same weight of an AR 15). The chair was even powder coated it red, white and blue.

“Wheelchairs for Warriors changed my life,” McWhorter said. “They came in, and in a matter of two weeks did more for me than the VA had done in four or five years. This has given me the ability to play with my kids and live a normal life.”

Wheelchairs for Warriors is located in League City and serves the entire United States. Their only criteria for a free wheelchair is that the veteran must be injured in the line of duty.

“The goal is to eventually give away one wheelchair a week, but now we average about six a year,” said Crystal Laramore, executive director for Wheelchair for Warriors. “We’ve been to California, North Dakota and a whole lot in the San Antonio and Austin area. Every donation we receive goes directly to veterans.”

To apply for a wheelchair or donate to the organization click here.