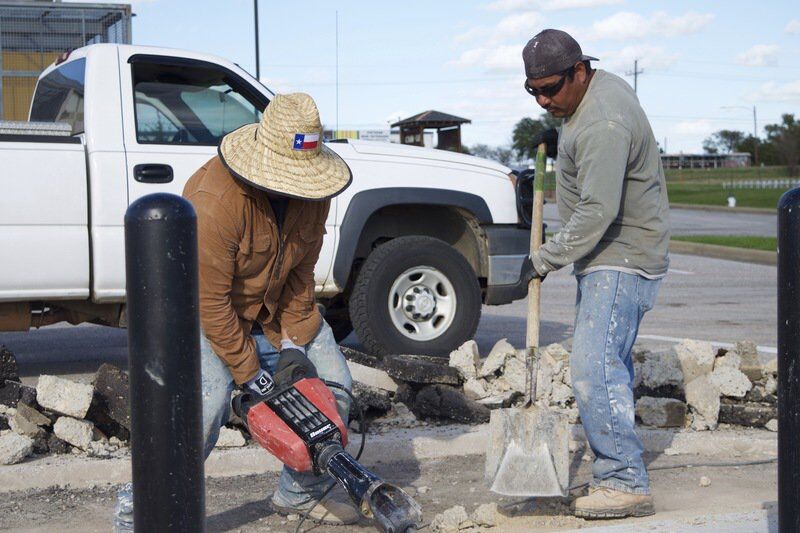 Michelle Wulfson | The ItemOscar Gomez and Francisco Hernandez with Swift Holdings commercial builders work on the sidewalk along what will soon be the Vietnam Veterans Memorial Wall. 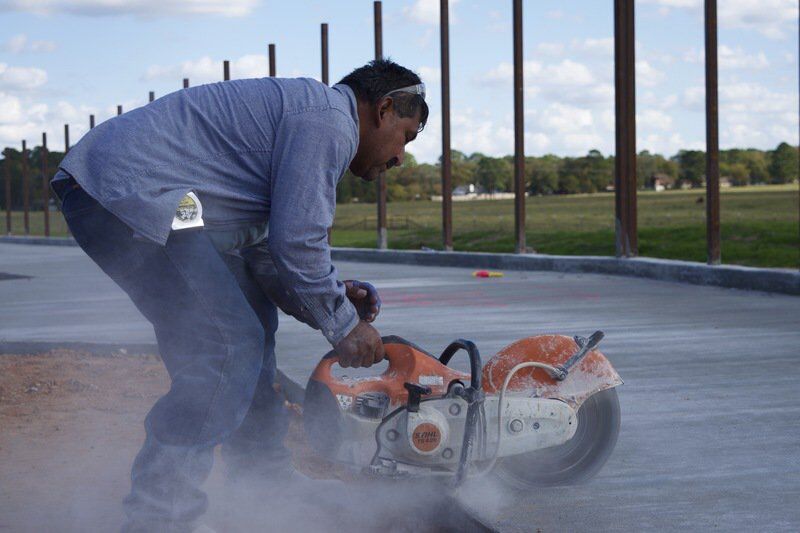 HUNTSVILLE — The Vietnam Veterans Memorial Wall is nearing completion, as a motorcycle escort is set to bring the wall to its new permanent home at the H.E.A.R.T.S. Veterans Museum in Huntsville this Saturday.

A group of motorcycle riders from the American Legion, the VFW, College Station, the Patriot Guard and more will meet the wall in Crockett and escort it the remainder of the way to Huntsville by 1:30 p.m.

While the wall will be arriving this weekend, H.E.A.R.T.S. Veterans Museum executive director Tara Burnett notes that it will still be a while before the memorial will be ready for the public.

The H.E.A.R.T.S. Veterans Museum began fundraising for the Vietnam Veterans Memorial Wall in September 2020 and received a HOT Funds grant of $50,000 that October that was contingent on the museum securing the remaining necessary funds. Over a year later, the museum will be approaching the city council again to request additional HOT Funds to help finish out the project.

The wall itself cost $140,000, while the cost of steel and concrete to construct the platforms for the panels and sidewalks, have surged throughout the pandemic.

“The project is taking quite a bit of money,” Burnett said.

Construction began in May, clearing the land at the back of the Museum to prepare for the installation. Dirt work was aided by the county, donating their trucks and time to bring in nearly 290 truckloads of dirt for the area.

Concrete work is currently underway since kicking off on Tuesday, while the panels will still need to be welded in place and wheel chair ramps installed before a grand opening and dedication can be held.

“Unfortunately, because it’s an outdoor project, we’re at the mercy of Mother Nature, so we are just praying that it’s done before the end of the year, but things are moving quickly from the dirt work, to the metal work, to where we’re at already with the sidewalk poured,” Burnett said. “It’s moving fairly fast, so as long as the weather withholds, we’ll be able to keep going at the fast pace that we are going.”

Burnett is hoping for a grand opening date in early to mid-December. However, it could be as late as the end of the year.

The Vietnam Veterans Memorial Wall was once a traveling memorial that was first displayed in Huntsville around 12 years-ago. It is an 80% replica of the infamous Vietnam Wall in Washington, D.C., complete with six software linked information panels that will stand apart from the memorial with bios on some of the 58,267 names on the wall.

With no other memorial like it in the region, Burnett and H.E.A.R.T.S. Veterans Museum board president Kenneth Lee are excited to finally be able to offer a tribute for veterans and their families to easily access.

“We’re really hoping that everybody from this area and anywhere in the state that reached out to us, we really hope that they all make the trip to come to Huntsville,” Burnett said. “That’s really what this is all about, is them being able to visit the wall, see their brothers and sisters that have fallen and honor them because so many of them can’t make that trip to D.C. anymore, so that’s the whole reason behind us doing this.”

As the project nears completion, the HE.A.R.T.S. Veterans Museum is still actively fundraising for lighting, flag poles and continued maintenance that will be needed after the wall is installed.

“We’re going to keep fundraising for it because we want to make it very nice and very special for those that come and see it and honor those that are on the wall,” Burnett said. “We’re really hoping that this is going to be a special part of the nation that really shows their patriotism, pride, respect and honor for veterans and their service.”

Donations can be made via mail with check or money order, over the phone, in person or in memory of a loved one. All donations must be specified that they are for the Vietnam Wall project.