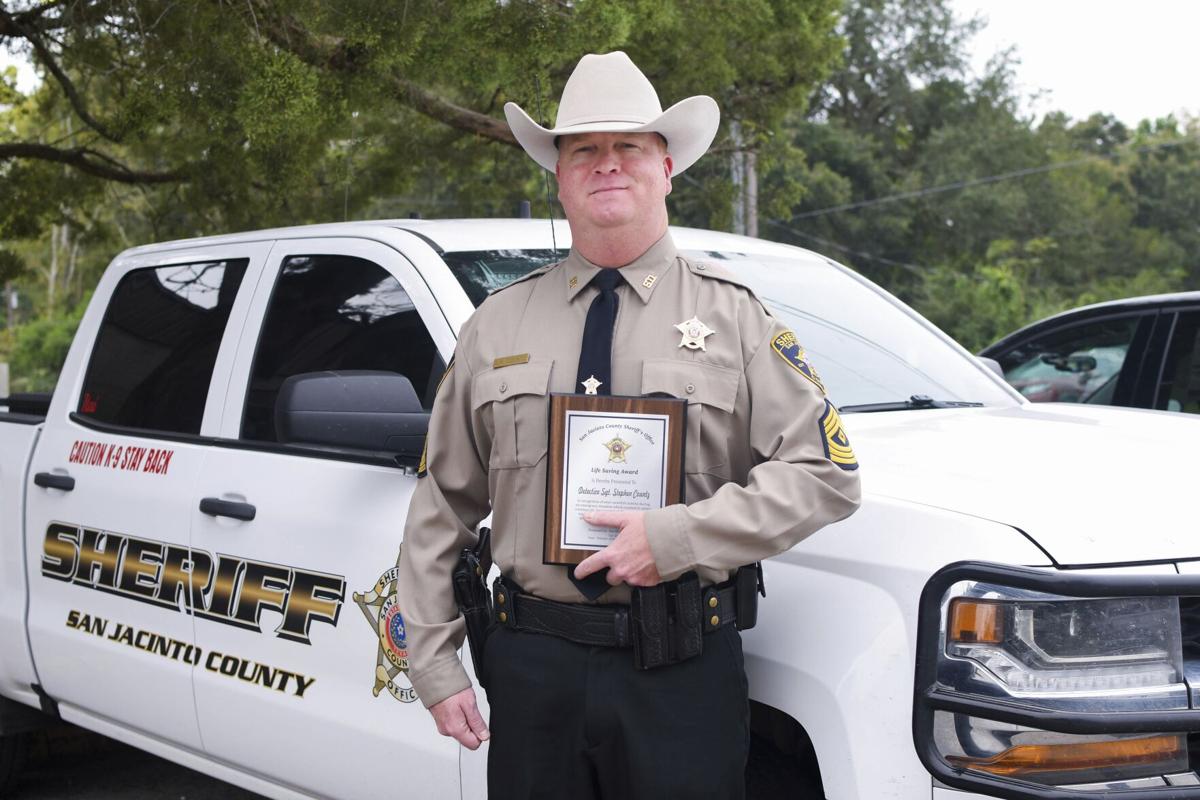 San Jacinto County sergeant Stephen Countz poses with his Lifesaving award for his dedication to ensuring his fellow officers' safety. 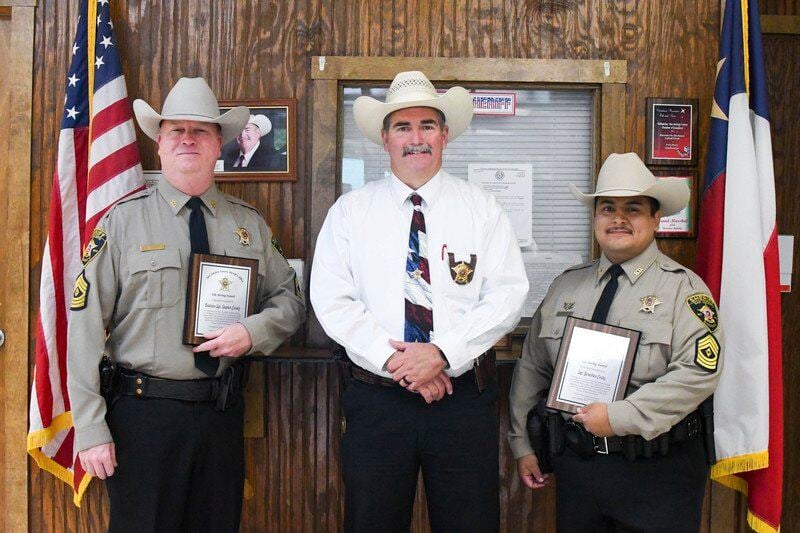 Sergeant Stephen Countz, Sheriff Greg Capers and Sergent Jonathan Cortez of the San Jacinto County Sheriff's Office share a moment together after receiving a Lifesavings award for their heroic efforts to save a suspect after a high speed car chase resulted in a near deadly accident.

Crabb’s Prairie Volunteer Fire Department captain and San Jacinto County sergeant Stephen Countz, as well as Sergeant Jonathan Cortez, Constable Ray Atchley and Constable Sam Houston received a “Life Saving Award” Tuesday at the San Jacinto County Sheriff’s office. The recognition came for their pursuit and brave rescue of a criminal known to be a part of one of the deadliest gangs in America.

“We don’t want to give any notoriety to the gang, but it was the absolute worst gang known to mankind … I’m not giving them credit for anything because that’s not the reason we went in, but that’s just the circumstances that surrounded this,” San Jacinto County Sheriff Greg Capers said.

The chase spanned 20-30 miles from the north side of Montgomery County on I-45 to New Waverly and up TX-150 into San Jacinto County.

Traveling at speeds well over 100 miles per hour in a stolen truck, the suspect was headed directly to a reduced lane construction zone, where Cortez alerted commuters and construction workers to clear the area for a high speed chase taking place. The suspect tore through the construction zone on TX-150 shortly after, stirring up a thick cloud of dust that caused pursuant Walker County Precinct Four constable Gene Bartee to crash his patrol vehicle, prompting the San Jacinto County Sheriff’s Office to take over the chase.

Cortez and Atchley pursued the vehicle for five miles through the sharp twists and turns of FM 945 South, before the suspect lost control of the truck on a sharp turn near Reed Road, hitting a tree. The truck was quickly engulfed in flames and smoke with the driver pinned inside.

Countz and Houston arrived shortly after the crash and the four devised a plan to extract the suspect from the vehicle safely. With a loaded pistol by the suspect’s side, Countz held the man at gunpoint while his team tried to pry open a door for rescue to no avail. The officers continued to try to contain the fire, while awaiting the help of a local fire department, however, the flames grew stronger and began encroaching on the driver.

As gasoline leaked from the truck, the officers knew they had to act fast.

“We were trying to save his life and not let that fire take it,” Countz said. “By this time, the fire was burning at the male’s feet. If something wasn’t done at that very moment, the driver would surely die.”

Houston and Cortez attached a tow strap from Atchley’s truck to the door of the suspect’s vehicle, pulling away the window portion of the door from the post, enabling the man to be removed while Countz continued to hold cover for the officers’ safety. The fire consumed what remained of the truck just seconds later.

Due to the bravery and relentless dedication of the four officers to save the suspect, the man was able to be transferred for treatment at Conroe Regional Hospital where he was taken into the custody of Homeland Security.

"It brought to fruition for me that there are still good people in America, because most people would have just let that guy burn, but not these policemen, because it’s every day that we are duty bound to save lives and that’s exactly what they did,” Capers said.

“I’m grateful for being able to save this guy’s life, it’s an honor to receive this award from my boss and I didn’t expect it,” Countz said.

Countz sent the commendation for the three officers that all worked to save the driver for the Lifesaving award to his sheriff, however, Capers felt that Countz needed to be included for his part in assuring the safety of his fellow officers as well. The recognition was also sent to The 100 Club in Houston for consideration for Officer of the Year and to Washington D.C. for consideration of a national lifesaving award.

“It makes me ecstatic, I am elated to have men like this working underneath my command. I have what every other boss wants, I have people that go out and save lives, that do the right thing every day,” Capers said.