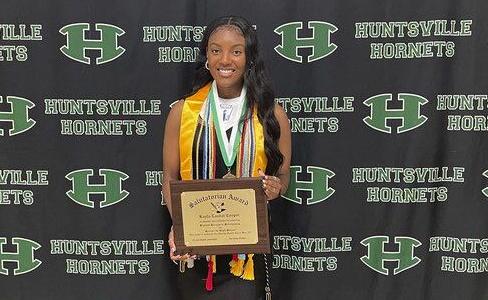 Kayla Cooper will say goodbye to Huntsville High School Saturday during the class of 2021 commencement exercises at the Cynthia Woods Pavilion in The Woodlands. After achieving numerous athletic and academic merits, Cooper looks forward to pursuing an education and career in architectural engineering. 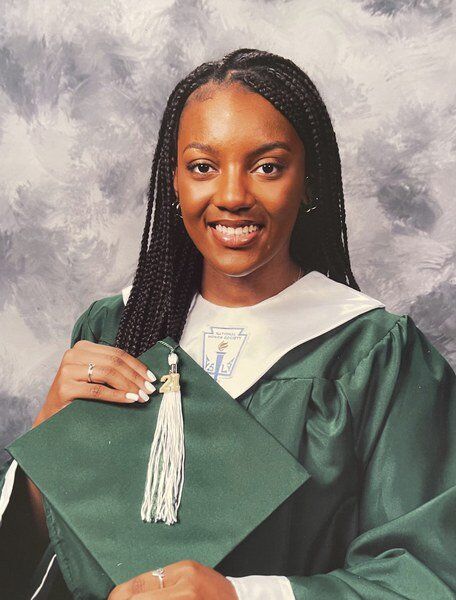 Huntsville High School graduating senior and class of 2021 salutatorian Kayla Cooper will be attending the University of Texas in the fall to pursue a major in architectural engineering.

Kayla Cooper will say goodbye to Huntsville High School Saturday during the class of 2021 commencement exercises at the Cynthia Woods Pavilion in The Woodlands. After achieving numerous athletic and academic merits, Cooper looks forward to pursuing an education and career in architectural engineering.

Huntsville High School graduating senior and class of 2021 salutatorian Kayla Cooper will be attending the University of Texas in the fall to pursue a major in architectural engineering.

HUNTSVILLE — An incredibly driven student dedicated to her education, 2021 salutatorian Kayla Cooper, will be graduating from Huntsville High School Saturday, having achieved her goals of ranking at the top of her class.

“At a young age, I knew that I wanted to be at the top of my class, but I never knew that I would be this high in my class,” Cooper said. “Putting in the work necessary to attain high grades was always a goal of mine.”

Students were notified of their class rankings earlier in the year when receiving their unofficial transcripts. Cooper had known at the time that she was second in her class, however, her achievement of salutatorian was not official until the school’s awards ceremony last week.

“At first, I was super shocked, but then it felt really good knowing that all of my hard work and countless hours put into school paid off,” Cooper said.

“I would say I’m very self-motivated, I’ve always wanted the best for myself, but the majority of my drive comes from wanting to make everyone in my family proud and also being able to reach limits that were never attempted to be reached throughout my family,” Cooper said.

Coming from a sports-enthused family who were excited for her volleyball accomplishments, Cooper put it on herself to focus on her academic achievements and, despite the difficulties the pandemic placed on schools, her hard work has paid off. Cooper will be moving on to attend the University of Texas this fall and major in architectural engineering.

“Math has always been a favorite subject of mine, so when I found out that engineering was heavily math based, I knew that would be the field for me,” Cooper said. “I think I like that there are multiple ways to find one solution, not one single way is the right way the majority of the time, there’s always multiple ways to get to one final answer.”

Cooper looks forward to embracing her creativity and knack for numbers to contribute to the world by designing buildings and cityscapes that she can be proud of.

“For the students coming up behind me, I would say to take everything seriously. Most people think that freshman and sophomore years are the years they can slack and not take school seriously, but in reality, each year counts and contributes to the main goal, which is of course your GPA and graduating,” Cooper said.

Huntsville High School will honor the class of 2021 during commencement exercises on Saturday at the Cynthia Woods Pavilion in The Woodlands.

Roy Eugene Smith, age 77, of Huntsville passed away Wednesday, June 16, 2021 at his home. Roy was born October 31, 1943, in Crockett to parents, Bevin Oliver Smith and Verna Elizabeth Wills Smith. He was a graduate of Huntsville High School then received his Bachelor of Science degree from T…