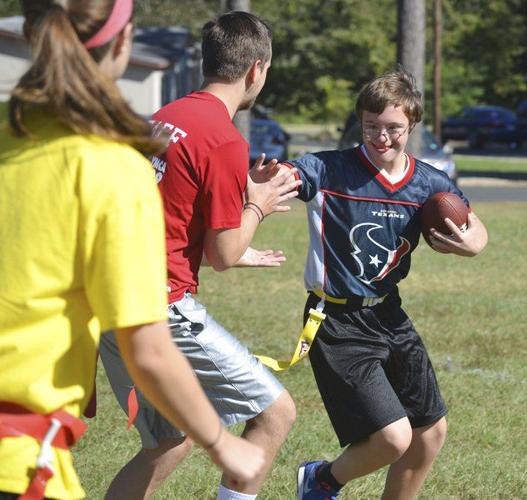 Matt Schweitzer, 12, uses a stiff arm to get away from a defender during Saturday's game at Huntsville Intermediate School. Schweitzer plays in the YMCA's flag football, basketball and baseball special-needs leagues. 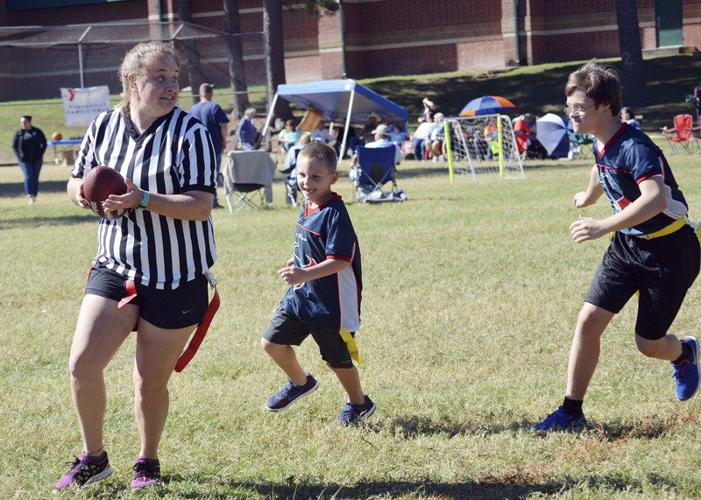 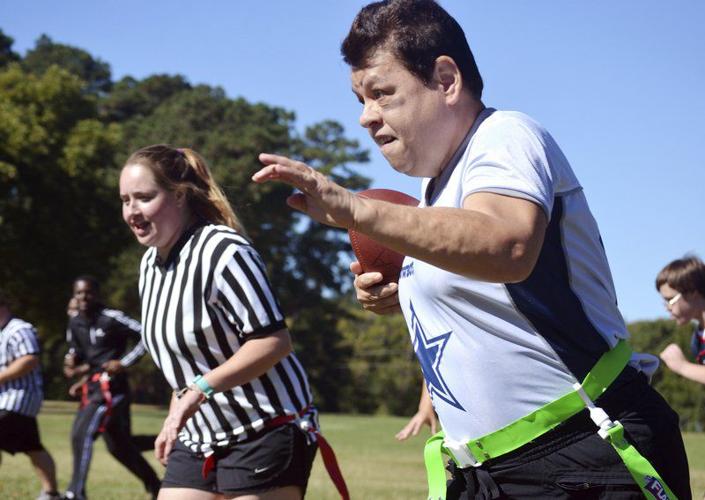 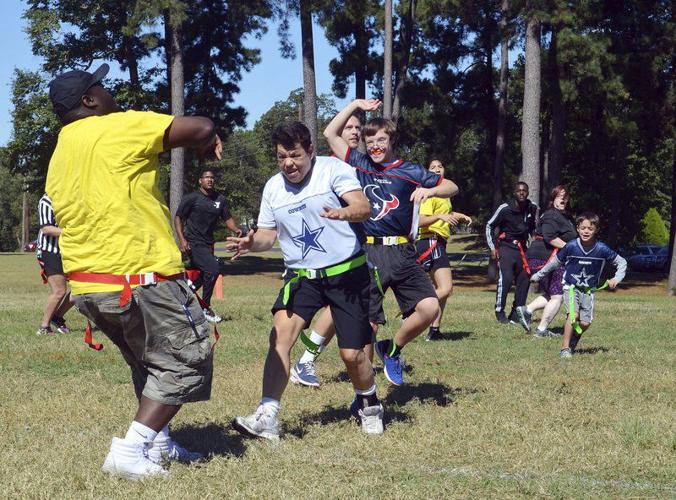 The Cowboys' Jeanette McGee teams up with Matt Schweitzer of the Texans to put on a heavy rush during Saturday's big YMCA Flag Football game at Huntsville Intermediate School. Project Sunshine volunteers, plus Huntsville Family YMCA workers pair up with the Cowboy and Texan players for a fun, but challenging game.

Matt Schweitzer, 12, uses a stiff arm to get away from a defender during Saturday's game at Huntsville Intermediate School. Schweitzer plays in the YMCA's flag football, basketball and baseball special-needs leagues.

The Cowboys' Jeanette McGee teams up with Matt Schweitzer of the Texans to put on a heavy rush during Saturday's big YMCA Flag Football game at Huntsville Intermediate School. Project Sunshine volunteers, plus Huntsville Family YMCA workers pair up with the Cowboy and Texan players for a fun, but challenging game.

Football offers a little something for everybody. Whether it’s throwing or running the ball, snapping it, catching it or even playing defense, there’s a part of the game where everyone can contribute.

The Huntsville Family YMCA is doing its part to make sure no one is left out.

Beginning last year with basketball and baseball, the YMCA offered adaptive sports — programs for children and adults with special needs. The success of those programs carried over into the fall when the local YMCA kicked off its NFL Flag Football program.

Smiles were created across the board for 12 local athletes who were split into Cowboys and Texans teams, and their families for the past six weeks.

“He has had a blast. It has given him a chance to compete at the same level and allowed him to grow as a player and develop some skills,” Cathy Schweitzer said of her 12-year-old son, Matthew Schweitzer, who plays flag football as well as basketball and baseball with the YMCA. “It’s just been so much fun.

“It gives (Matthew) something to look forward to. It teaches him a sport that he can grasp and gives him an outlet to be part of a team that he wouldn’t have otherwise.”

Throughout the season, which began with practice in mid-September, the players participated in drills such as running with the ball between cones and worked their way up to playing games.

“I had a lot of fun. I like football,” Cowboys’ star Jeanette McGee said.

“They have such a good time,” added Lorraine McGee, Jeanette’s stepmother. “For us, it’s just amazing.”

“It just gave them an opportunity to really bond and get some exercise and socialization,” Clifton said of the participants. “It just warms my heart to see the families come out here. They’re so grateful for the opportunity because we didn’t have anything like this in Huntsville for the adaptive needs.

“We serve both the physical and intellectual disabilities,” Clifton added. “Anyone with a disability at any age can participate. Basketball is coming up next, so we’re hoping to see this program just continue to grow.”

Matthew Schweitzer played YMCA flag football before there was an adaptive needs program and his parents see the difference in playing with other athletes with special needs.

“It’s a little more laid-back, so there’s more freedom,” said Robert Schweitzer, Matthew’s father. “He’s trying hard and it gives him that freedom just to run and have fun. That’s what it’s all about.

“That’s not to say he didn’t do that in the other league, but this is more of his pace.”

Another goal of YMCA’s adaptive sports programs is to complement the sporting events that Special Olympics puts on like track and field.

“We’re not running the same sports,” Clifton said. “They’re doing a lot of the track and field events at Special Olympics here, so we’re focusing on other events that they’re not having. The goal with any of the Y programs is not to duplicate services because there are so many wonderful agencies and programs in Huntsville.”

“The vision to start this program and build on it with all of the Y sports gives our kids a future,” Cathy Schweitzer said, “and an outlet for sports and teamwork.”

The next program that the YMCA will be putting on for those with special needs will be adaptive basketball. Registration is now open. It costs $25, but scholarships are available. For more information, call the Huntsville Family YMCA at (936) 295-8009 or register online at www.ymcahouston.org/huntsville.

“Our goal is not to turn any kids away from this program,” Clifton said.