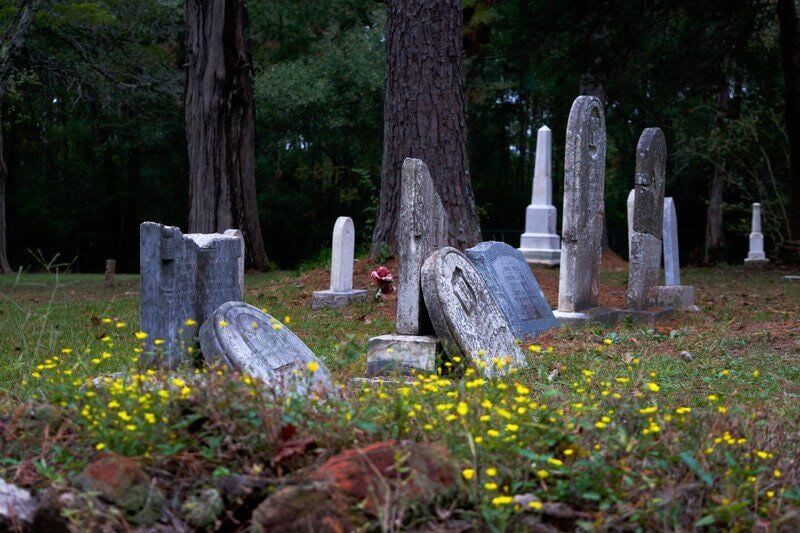 A row of tombstones in the newer section of Martha Chapel Cemetery. Hands are said to come out of the graves at night looking to pull the living under. 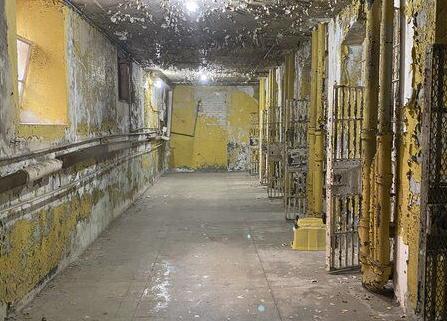 The former Texas Death Row has remained vacant since 1952. Located within the historic East Building of the Huntsville “Walls” Unit, the area is off limits to everyone except the warden. With a rich history, including the housing of Raymond Hamilton, a member of the notorious Bonnie and Clyde gang, the former death row is home to countless stories of clanging of cell doors and voices that have called out those who enter. TDCJ 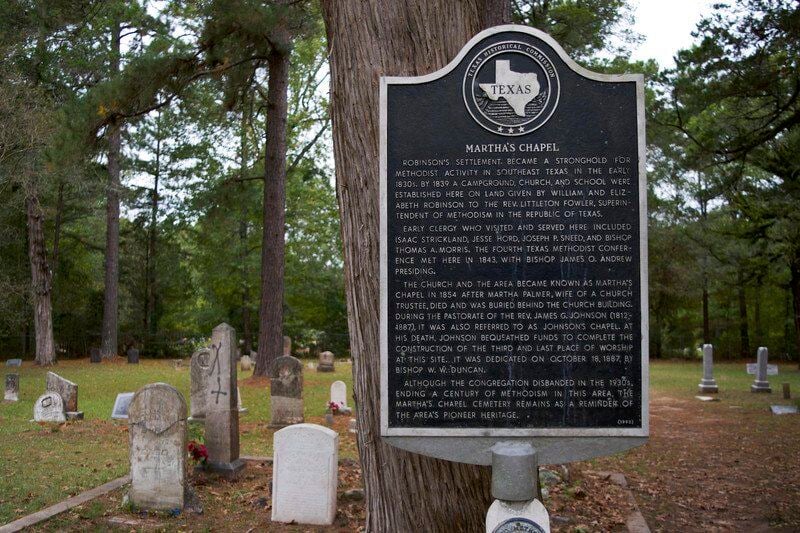 Martha Chapel Cemetery is the only remains of the Robinson Settlement in south west Walker County and has been marked by the Walker County Historical Commission. 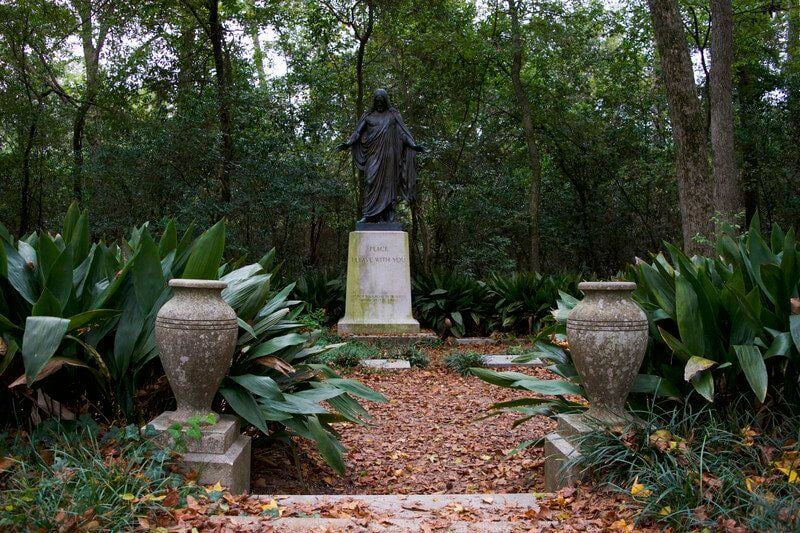 The Powell family plot at Oakwood Cemetery in Huntsville is home to what locals and college students refer to as, “Black Jesus.” 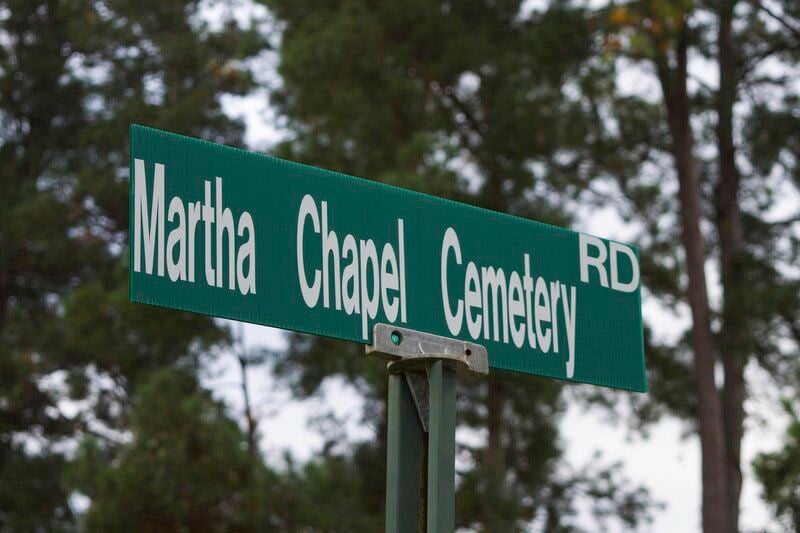 Martha Chapel Cemetery off of Bowden Road, more commonly known as “Demon’s Road,” has drawn locals and tourists curious to see if the haunting tales of the area are true. 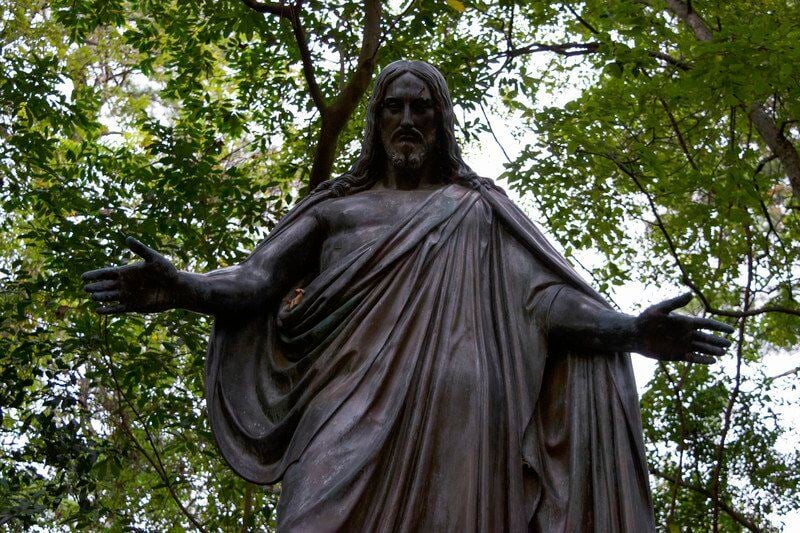 A bronze statue of Jesus stands as the grave marker in the Powell family plot for a five year-old boy that died in 1923. The statue’s hands are said to turn from palms facing up to facing downward at night. 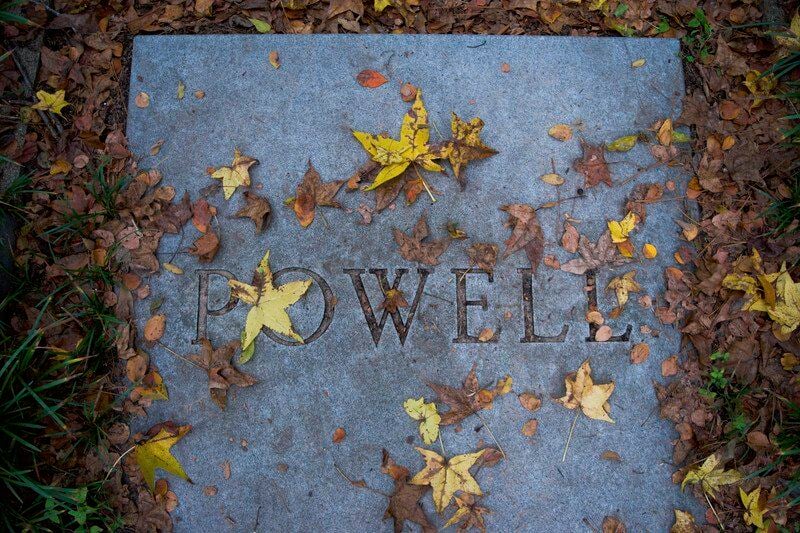 Many historically recognized Walker County families reside in the Oakwood Cemetery including the Powell family which holds a debatably haunted statue of Jesus.

Everything’s bigger in Texas — including the number of ghost stories that keep us up at night.

That’s especially true for those of us in Walker County, which is known for its deep history and rich, storied past.

Ghost hunters and paranormal enthusiasts have been drawn to the area for decades seeking the truth behind tall tales of hauntings, sightings and eerie, spine tingling sensations. From homes, to cemeteries, prisons, university buildings and beyond, Huntsville is seemingly brimming with superstition.

This Halloween, we’ve collected tales of some of Huntsville’s most well-known hot-spots for supernatural activity. Whether or not the rumors are true is up to you to decide.

Built in 1849, the Huntsville Unit — or more commonly referred to as the “Walls Unit” — is the oldest state penitentiary in Texas. Situated in the middle of downtown Huntsville, the “Walls” Unit is thought to be one of the most haunted prisons in the U.S., likely due to housing the state’s execution chamber.

It was also home to Texas Death Row up until 1965, housing some of the most notorious criminals in the country.

One of the most historic buildings within the state penitentiary holds the most stories. The historic east building holds many vivid accounts of correctional officers and inmates suggesting that the souls of executed inmates wander the area of the east and south buildings and the catwalk that connects the two.

However, the most haunting facility on the property is the old death row, which has remained vacant since 1952. The small section of cells is inaccessible to all, but the warden. However, some have witnessed apparitions, and have heard the clanging of cell doors and voices that have even called out to them.

The oldest building on Sam Houston State University campus, Austin Hall is the original building of Austin College. Erected in 1851, it is the oldest building west of the Mississippi River that has been in continuous use by a higher educational institution. Austin College was chartered in 1849, with none other than Sam Houston on its board of trustees, and it’s said that he can still be seen to this day walking the halls of the historic building.

Likewise, a woman dressed in a black Victorian-era dress has been seen gazing out of the building’s far-right window on the second floor. Others have claimed to have observed a small boy playing in the same area and have photographed orbs, or signifiers for spirits, near the building’s elevator, which mysteriously moves through the building’s levels on its own. To tie it all together, Sam Houston was given the name of The Raven by Cherokee Chief Oo-loo-te-ka while living with the Cherokee in Tennessee in the early 1800’s, and every now and then a black raven can be seen pecking at the same window as the victorian woman.

The cemetery made international news in 2018 when “eerie” figures were spotted in a Google Maps Street View of the site. However, serious ghost hunters from across the state have been drawn to the area for much longer, chasing their curiosity to see if the rumors are true.

Located in western Walker County, Martha’s Chapel Cemetery is all that remains of what was once known as the Robinson’s Settlement, which dates back to the 1830’s. This small, quiet country cemetery off of Bowden Road, more commonly referred to as “Demon’s Road,” is thought to be named for the first person to be buried there, Martha Palmer, and is home to accounts of extreme paranormal activities.

Leading up to the graveyard, “Demon’s Road,” is said to be home to wandering spirits. Many who have driven down the road have said they’ve felt as if someone were pushing their vehicle and have witnessed menacing red eyes piercing the pitch-black darkness. At the cemetery, visitors have recalled sightings of ghostly figures and hands protruding from graves to pull the living under. Some experience car trouble when trying to leave and large hand prints on their cars.

Furthermore, many warn you not to visit the site unless you are prepared to have one or two spirits follow you home.

Home to the spirits of deceased confederate soldiers, slaves and well-known Huntsville families including General Sam Houston, history runs deep at this cemetery. Spookiness is sure to occur at any resting place. However, a particular grave marker seems to attract its fair share of interest.

The Powell family plot is home to what many call “Black Jesus,” a bronze statue erected over the grave of Rawley Rather Powell, who died at the age of five years old in 1923. The statue is one of five in the nation. It was created by Christus Thorvaldsen as a copy of the original in Copenhagen, Denmark, and was dedicated by the Powell family in 1925. It is natural for bronze to turn black over time due to the oxidation process. However, it is said that many were confused over how quickly the statue’s hue darkened despite efforts to keep it polished. Additionally, the statue’s hands have been said to turn from palm up to palm down at night.

Now located at the Sam Houston Memorial Museum, the Steamboat House was the final home of General Sam Houston. The Republic of Texas president rented the house in 1862 after being removed from governorship in 1861 for refusing to join the Confederacy. It was in this unusual house that he died of pneumonia one year later, in 1863. His funeral even took place in the upstairs parlor.

The house has since been moved from its original location — at the corner of Avenue F and Ninth Street — on the grounds of the Sam Houston Memorial Museum and supposedly, the spirit of Houston was transported with it. Tourists and visitors have witnessed the back doors to the house opening and closing on their own accord. A rocking chair in one of the bedrooms has been seen steadily rocking while unattended and others have reported a child’s handprint in one of the windows.