A project to replace a waterline and resurface the roadway on Sam Houston Avenue and Avenue J is expected to begin in over the summer, following the Huntsville City Council’s approval of a contract with Underground Construction Solutions.

City Manager Aron Kulhavy said the contract, not to exceed $156,105, will include replacing the existing domestic water line that services the Lowman Student Center on the campus of Sam Houston State and businesses near Fire Station No. 2. 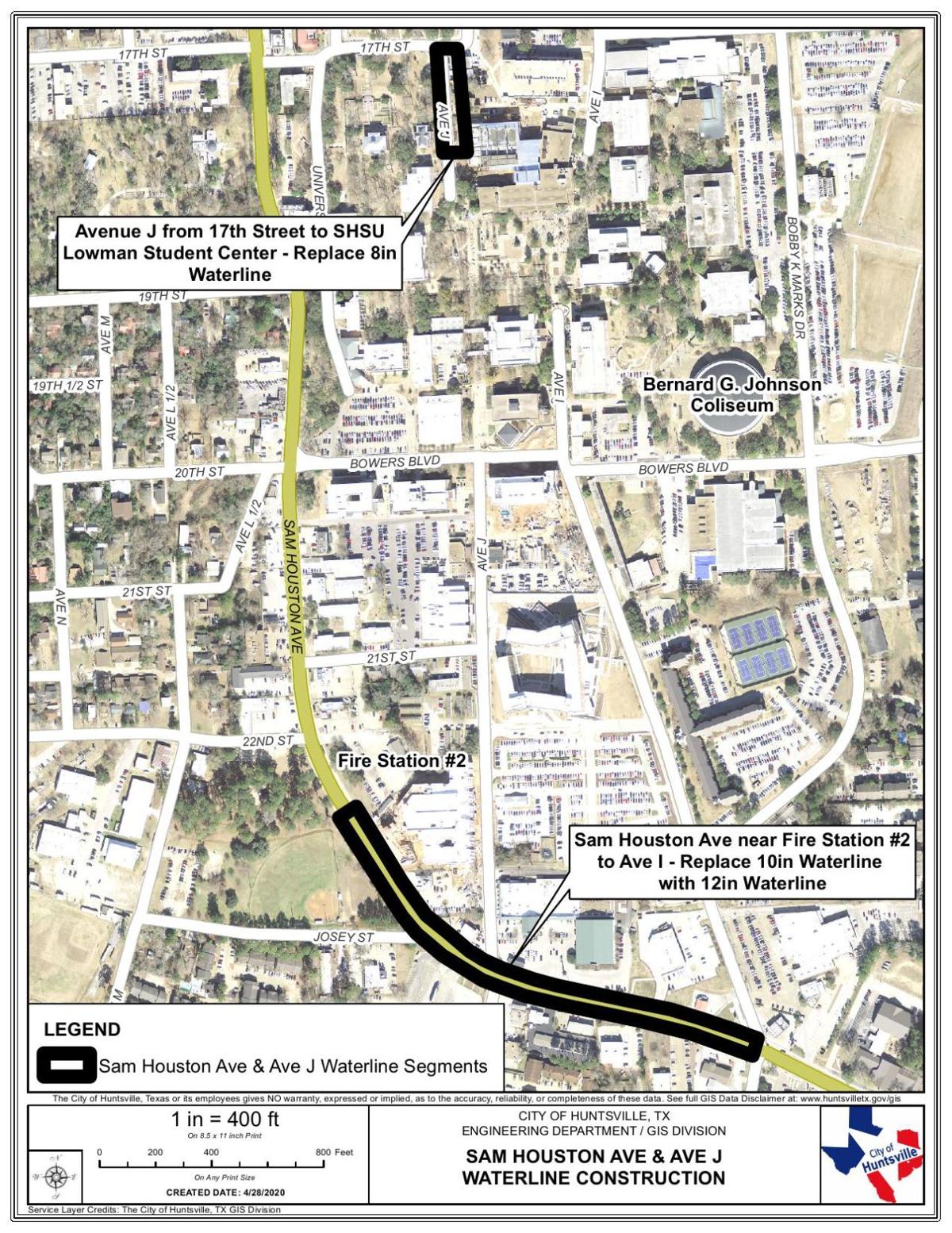 Kulhavy said the work is expected to begin in July and could take 90 days to complete. The city’s cost for the project is being funded out of 2018-19 miscellaneous waterline replacement project funds.

Councilmember Joe Rodriquez questioned city staff if new upgrades to the city’s pressure plane, which is expected to be put online May 26, would make the waterline replacement near the university unwarranted.

“The waterline in this segment is really old, so at some point we will have to come back and fix it. The logical thing to do is to go ahead and include it now, so that we don’t have to come back to it later after the new system goes online,” City Engineer Y. S. “Ram” Ramachandra said.

However, Mayor Andy Brauninger did point out that some of the city’s old water lines could break when the new pressure system is started, due to increases in pressure.

“We are hoping that this is not the case, but we are anticipating some breaks,” Ramachandra added. “Engineering and public works are constantly looking at the high pressure areas and will have to keep a close eye on it as the pressures adjust in the coming weeks.”

No subsequent action was taken on a $358,862 contract with Underground Construction Solutions for the replacement of water lines at the edge of 16th Street and on 15th Street and 17th Street near the university campus. Kulhavy requested that the city council hold a second reading for the ordinance next month, since it eclipsed the $300,000 threshold.

In other action, city council:

• gave authorization for the city to enter into an annual agreement with NAPA Auto Parts of Huntsville for the purchase of various automotive parts and equipment and with Walker County Hardware for hardware and associated supply items.

• approved a BuyBoard contract totaling $107,096 for the rehabilitation and relining of 20 manholes.

• approved an ordinance to amend the city’s 2019-20 budget and CIP project budgets, which included nearly $1.08 million in savings from capital improvement projects. The amendment also included a $105,000 annexation settlement agreement with Walker County ESD No. 2, a $175,000 increase for the waterline replacement projects and a $92,194 expense to be paid to Weatherford U.S. L.P on an economic development agreement.

The next scheduled meeting of the Huntsville City Council is scheduled for June 2.