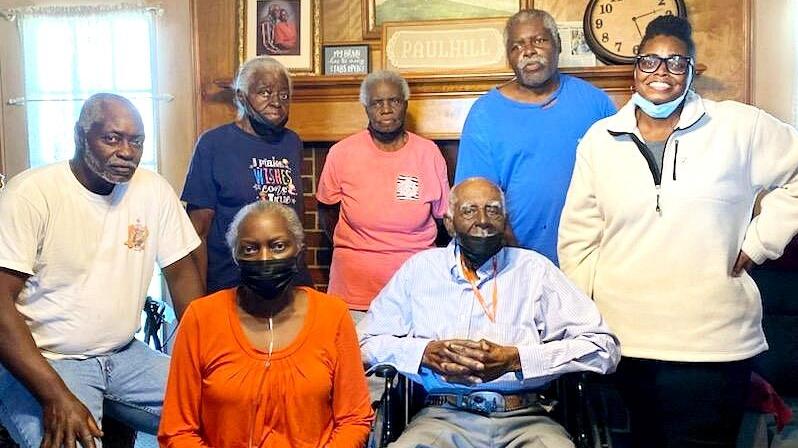 Booker Paulhill, 104, at home with his wife, Myrtle, 93 (center back), and five of the couple’s ten children. 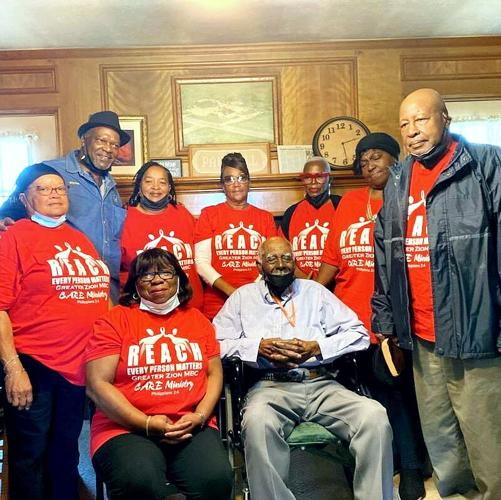 Booker Paulhill, 104, at home with his wife, Myrtle, 93 (center back), and five of the couple’s ten children.

The Care Ministry of Greater Zion Baptist Church of Huntsville visited a 104-year-old man and his family in Shiro, for a belated birthday celebration.

Booker Paulhill is well-known around Walker County, having been an example of tried and true wisdom and having the secrets of good health. The story of his life reached Care Ministry President Sharon Smith.

“The Care Ministry is a group of volunteers who participate in a variety of services. We organize home or hospital visits to brighten a person’s day, send cards of encouragement, prayers of healing, home visits, and make baskets of cheer,” said Smith.

Paulhill was born Sept. 9, 1917, in Red Top, Texas, a small community southeast of Shiro. He is married to Myrtle Mae Paulhill, 93, whom he met 72 years ago.

The Paulhills have 10 children, including seven girls, and three boys. Mrs. Paulhill said she loves and appreciates her family. She and Mr. Paulhill raised them to be close-knit, and to take care of each other. When one sibling graduated from college, the graduate was responsible financially for helping the next sibling entering college.

Two of the children attended Sam Houston State University. The current home where the parents reside, was built by one of the children, a retired Dallas Police Officer.

The Paulhills pride themselves with successfully growing everything they needed and more, except for rice, flour, and sugar. They raised cattle, horses, and chickens. He learned farming from his father, who gave him the land he cultivated for many years.

“I stopped farming several years ago, but stay as active as I can,” said Booker.

One of Mr. Paullhill’s early Huntsville employees, Edwin McGowen, remembers in the mornings he and his brothers would be picked up by Mr. Paulhill and transported to Shiro to pick cotton.  McGowen remembers a nearby store would let him make purchases on credit until he got paid. Soon his all of his pay was going to the store and his dad made him quit.

One of the daughters shared a story from years prior, when their home burned down on Thanksgiving day. The miracle was, by the evening, the family was sleeping in another home that the father had purchased. It was a memorable moment for the children and a lesson in frugality.

The family was treated to two songs, prayer and scripture reading by the Care Ministry. They also gave Mr. Paulhill a large belated birthday basket. Paulhill said his wishes for Christmas “are to be alive and to receive prayers for good health from family and friends.” Paulhill feels an active life and loving family are important to long life.

Studies have confirms that individuals who live to be 100 years old and older have similar habits. They exercise or stay physically busy, they don’t over eat, serious illnesses are delayed, eat healthy foods, they stay connect with their community or church, have good genes, feel respected, enjoy outdoors.

Medical experts recommend for the rest of us, to get more sun light- but not too much, eat more plant based protein, eat nuts, drink coffee, don’t smoke, spice it us and moderation of alcohol.

“A day in Shiro was a day well spent and they individually, agreed to make life changes to increase the odds of reaching 100 years old,” said Smith.