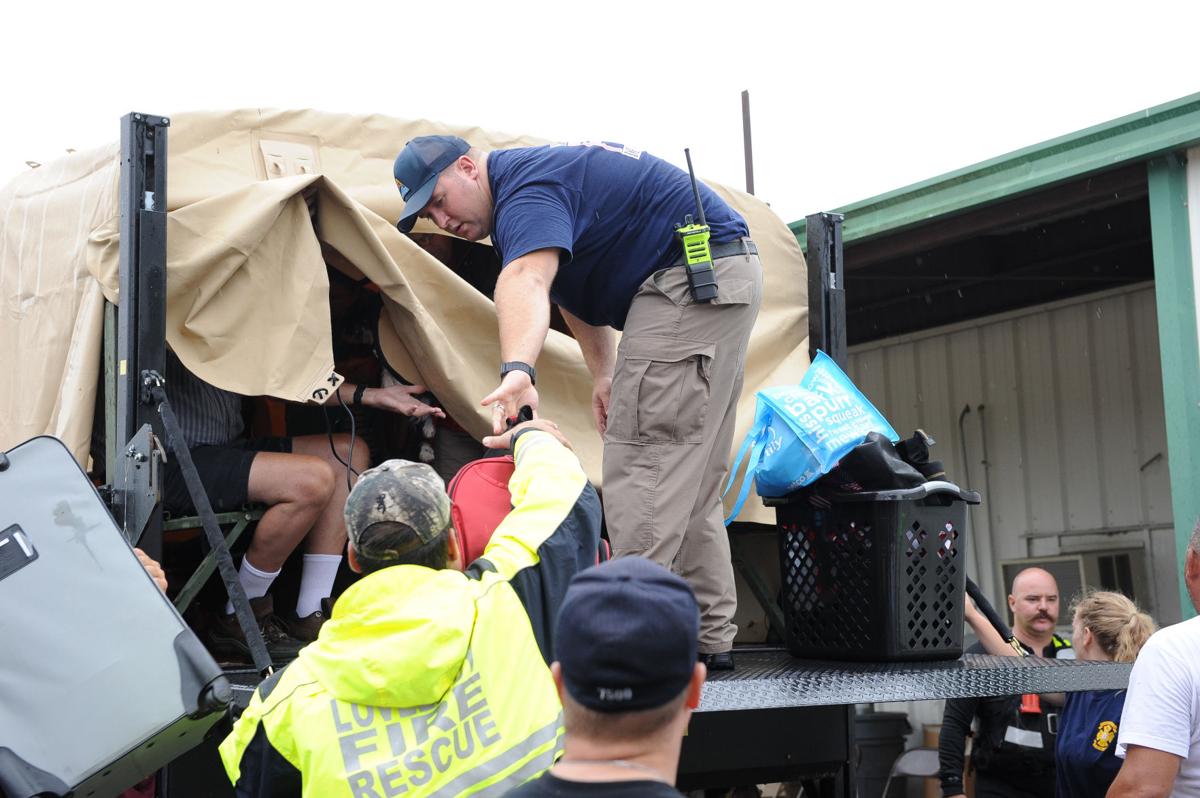 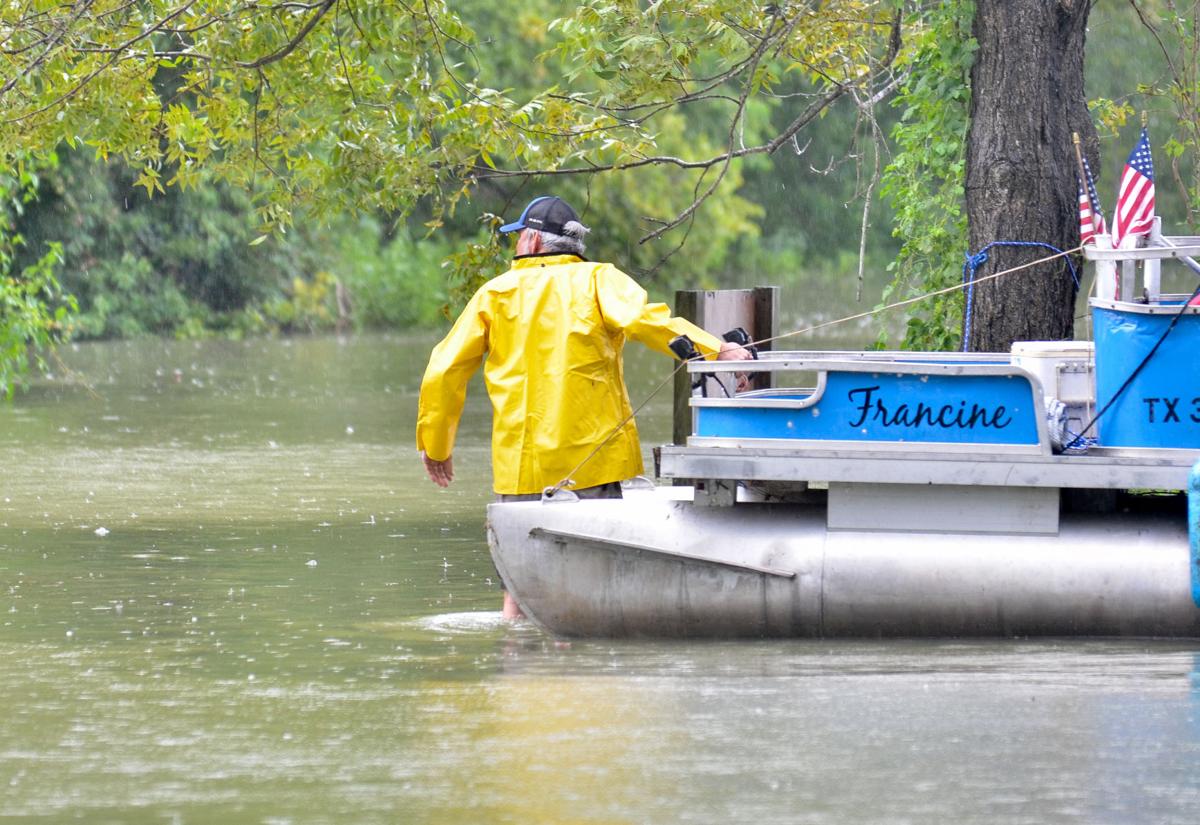 Mitchell Young work on getting his boat secured at Lake Livingston, Monday, Aug. 28, 2017, as water rises in the area. 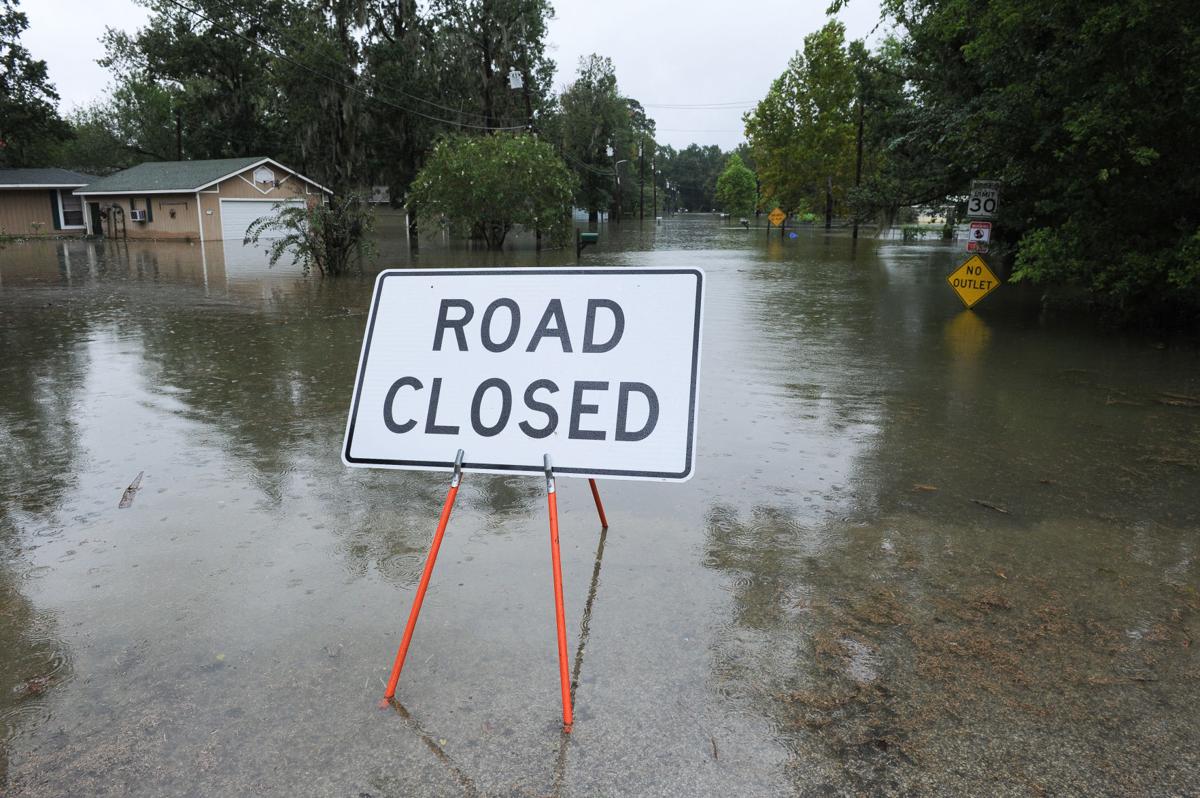 Roads at Lake Livingston sit underwater, prompting an evacuation of some residents in the area, Monday, Aug. 28, 2017. 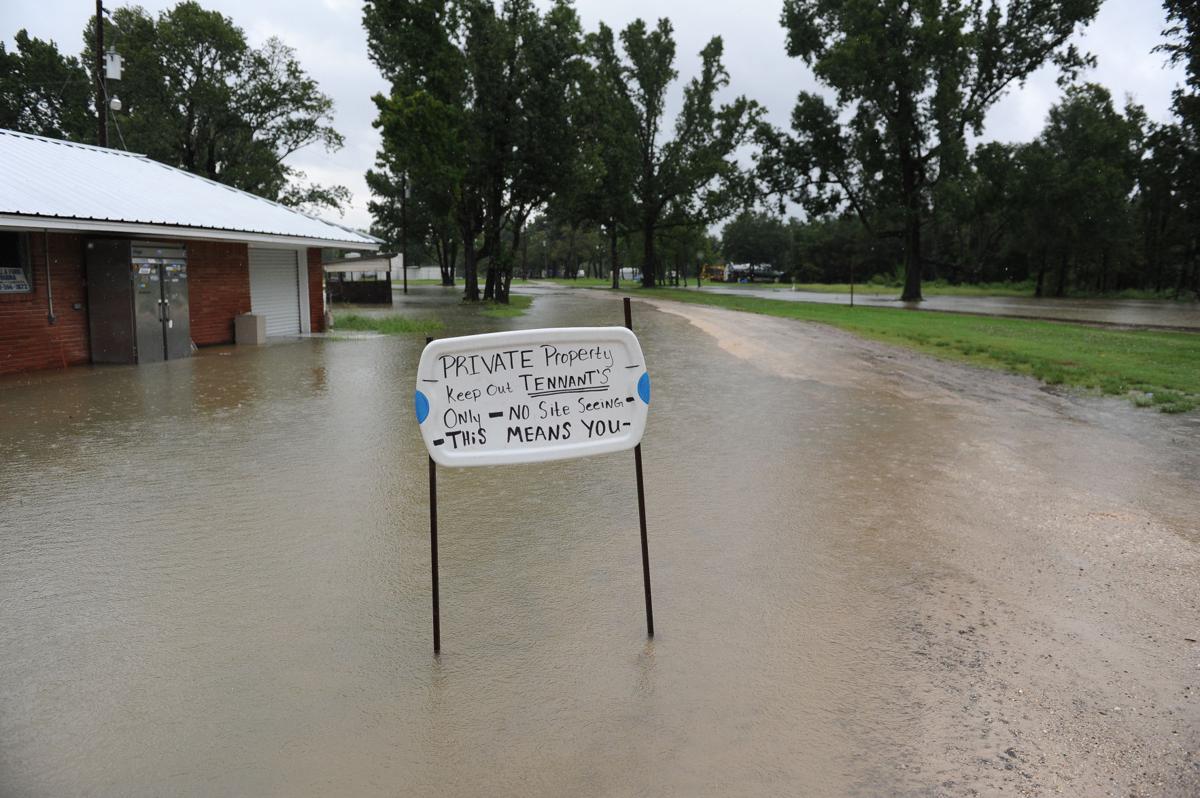 Mitchell Young work on getting his boat secured at Lake Livingston, Monday, Aug. 28, 2017, as water rises in the area.

Roads at Lake Livingston sit underwater, prompting an evacuation of some residents in the area, Monday, Aug. 28, 2017.

As Charlene Crocker was lowered to the ground on the back of a khaki-colored high-rise truck, she gave the Thomas Lake volunteer firefighters assembled below a big smile.

"I'm smiling because otherwise I have to think about how my house is going to be underwater," Crocker said, once she stepped on dry dirt.

All Crocker had in her arms was a suitcase and her white pooch, Annabelle.

Crocker was about one of the about 25 residents in subdivisions along the Trinity River to be evacuated Monday. Just hours earlier, Walker County Judge Danny Pierce ordered a mandatory evacuation for Sterling Island and Green Rich Shores.

About 20 of those evacuees found shelter up the road at the Carolina Creek Christian Camp, which had open its doors to the neighborhood.

Knocking door to door, firefighters expressed to residents how dire the situation could be: If they didn't evacuate now, rescues by the volunteers were unlikely, Charles Brandewie, head of the volunteer fire department, said.

Like the other volunteers, Brandewie lived in the area for about 17 years.

"This is the highest it's ever been since I've been around," Brandewie said of the water that has been rising for the last couple of days.

"They will release whatever they have to, to not get to 134," Daugette said.

The tradeoff was that low-lying areas downstream were bearing the brunt of the controlled floods, he said.

Before Lazy Bend, Lakeview Drive was impassable. The street was a ghost town. A full set of chairs around a table lay abandoned in a front yard. At the front of one house, a kayak tied to a tree floated lazily along an invisible current.

Though one sign near the marina said, "No site seeing, this means you," the only life visible Monday belonged to egrets and storks standing nearby to enforce the mandate.

A 16-year-old roared over debris and mud on an ATV to get help evacuate his grandmother. He said that up until Monday, his grandma had refused to leave because she was afraid looters would come through her house.

On dry land, evacuees huddled under the awning at the Thomas Lake Fire Department, several with dogs and cats, but little else.

Crocker said that firefighters came to her door and told her she had one hour to get everything she needed before one of the three high-rise trucks came back to get her and two grandsons, Jake and Zachary Crockett.

Unlike most evacuees who headed to Carolina Creek Christian Camp, Crocker decided to stay in a friend's RV, while one of the grandsons left for a friend's in town and the other headed to Dallas.

The camp, whose guests had to cancel their trip to Huntsville, opened their doors to the community, instead, according to partnership supervisor Sarah Gerke. As of one of the highest points in the area, she expected more residents to make their way to the camp.

The camp was only open to the local residents as of Monday. However, if shelters in Huntsville start to overflow with Hurricane Harvey refugees, Gerke said the camp will re-evaluate. Between its three sites, the 440-acre camp has more than 1,000 beds.

"We just believe in our community. ... When they are in need, we are here to be open for them," Gerke said.

As of 4 p.m., the last high-rise truck was sent out to get stragglers or those who might have second thoughts.

Most of the sick and elderly had been evacuated, but Brandewie said he knew of at least one family in a dangerous area that refused to budge.

Susan Peters and her boyfriend, Mitch Young, decided to ride out the rest of hurricane in his home in Sterling Island. Though his house faced the water and their dock was four feet under water, it was high enough of the ground that flooding wasn't a concern.

Young said he had stayed put during Hurricane Ike and every other hurricane that had come his way in the 28 years he lived in the house.

"If (the water) gets to this house, a lot more people are going to be in trouble than I am," Young said.

Since both the marina and his dock were inaccessible, he tied up his boat to a tree near the house, just in case an escape was needed.

"I think that's the road he's parked on," Rita, said peering into the water by the boat.

Two fridges were stocked with groceries and Young got the last two 30-packs of Busch beer from the store, Peters said. Their three dogs looked longingly at the yard from the sliding glass doors.

It was Peters' birthday Monday and she said she didn't mind turning 51 during the hurricane. They were going to celebrate by watching the water rise.

"I wouldn't change this life for anything," Peters said, looking at gently lapping waves from her deck.

This story has been updated to clarify that Thomas Lake Road is upstream from the Livingston Dam.

To donate to the evacuees at the Carolina Creek Christian Camp, its partnership superviser Sarah Gerke recommended first e-mailing the camp at office@carolinacreek.org. As of Monday evening, Gerke said most evacuees needed toiletries, such as shampoo and toothpaste. However, as the days go on, she said the camp will continually assess their needs.